Oil prices weakened heading into US crude's settlement Thursday after a larger-than-expected drawdown in US crude stockpiles was balanced by a stronger dollar and position squaring ahead of the expiry of the front-month contracts in gasoline and diesel. Benchmark Brent crude oil was down 15 cents a barrel at US$53.20, after settling 8 cents higher in the previous session.  _ Reuters

Japan June inflation stalls: Japan's annual core consumer inflation stalled and household spending unexpectedly fell in June, underscoring the challenges the central bank faces in reflating the economy to meet its ambitious 2% price target. But the central bank is set to hold off on expanding monetary stimulus for now, as policymakers have repeatedly said they will look through the effect of last year's oil rout that is mainly behind the slowdown in inflation. - Reuters

Shell to axe 6,500 jobs, cut spending: Royal Dutch Shell is to axe 6,500 jobs this year and step up spending cuts, responding to an extended period of lower oil prices which contributed to a 37% drop in the oil and gas group's second-quarter profit. The Anglo-Dutch company is also increasing asset disposals to US$50bil between 2014 and 2018 as it pushes ahead with its proposed US$70bil acquisition of BG Group. - Reuters

Stemming the decline: As the downward pressure on the ringgit mounts, Bank Negara has adopted gentle suasion methods to stem the decline. Senior executives of the central bank have had briefings with foreign exchange (forex) dealers from local and foreign financial institutions this week discouraging them from entering into transactions that result in selling the ringgit. - StarBiz

(MAHB) reported a smaller net loss of RM19.88mil for the second quarter ended June 30, in line with analysts’ expectations. Its revenue for the quarter slipped 20% to RM939.96mil. - StarBiz

’s net profit was up 13.29% to RM1.2bil on the back of a 16.72% jump in revenue to RM4.74bil for its second quarter to June 30. The better earnings were mainly due to a healthy growth in loans and deposits, and stable asset quality. Gains arising from foreign exchange fluctuations in respect to the group’s foreign operations had also partially contributed to the profit growth for the period. - StarBiz

’s net profit surged 190% to RM31.38mil for the second quarter versus a year ago on a change in product mix, improved utilisation rates and lower interest expense. Its revenue rose 18.7% to RM298.79mil. The company declared a three-sen dividend. - StarBiz

Cost savings exercise puts new MAS on firm footing: An initial cost savings of at least RM180mil from catering contracts plus a few hundred million more from lesser payroll expenses due to a leaner workforce for the next three years will put the new Malaysia Airlines (MAS) on a firm footing as it climbs its way to profitability in 2018 as targeted, according to an academician. - StarBiz

Khazanah setting up London office: Khazanah Nasional Bhd is setting up an office in London this quarter to expand the sovereign wealth fund’s exposure to the developed market. - StarBiz 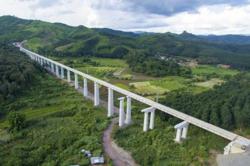 International tourists to Cambodia's Angkor expected to rebound next year