THE booming presence of developers from China in Johor has not only ruffled feathers among local developers but also sparked concerns of the Singapore government due to the massive land reclamation works.

Following the high-profile entrance of Guangzhou-based Country Garden Holdings Co Ltd, which launched 9,000 units in Danga Bay at one-go in 2013, all eyes are now on other developers from China who are expected to adopt carpet bombing kind of development.

Country Garden made the first move in Johor Baru. It is followed by Guangzhou’s R&F Properties Co (R&F) that bought 116 acres near the first link in Johor Baru from the Sultan of Johor for RM4.5bil. R&F could be launching as many as 30,000 units over the next few years on land that is to be reclaimed.

Agile Property Holdings Ltd is another China-based developer that is expected to make its presence felt in Johor Baru after it bought 1.3ha from Tropicana Corp Bhd

A study by a government investment body, which had undertaken a comprehensive development plan for Johor estimated that the number of new condominiums coming up in Johor Baru is about 30 times over the number of units built in Mont Kiara. R&F may launch 30,000 units over the next few years on land that is to be reclaimed.

“That is the number of new units coming into the market,” says an official.

But what has caught the attention of the Singapore government is a project near the Second Link involving 5,000 acres (2,023 ha) reclaimed from the sea.

Country Garden, one of the Top 10 developers in China, has teamed up with a subsidiary of Johor’s state-owned investment arm, Kumpulan Prasarana Rakyat Johor (KPRJ), to undertake the job.

The development has caught the attention of Singaporean authorities who felt that it would eventually have an impact on their shore line.

Towards this end, Singapore has sent a note to Wisma Putra expressing concerns over the project.

“It is being dealt with” says a source. An addition of 5,000 acres also means that there will be much more land in the southern region, possibly impacting the sustainability of the supply-and-demand chain.

In an interview with StarBizWeek, Country Garden regional president for Malaysia project Kayson Yuen says the mega project “Forest City” will span over 30 years and the company had studied it more than a year ago before committing into it.

He said the land was bought at a “reasonable price” but could not furnish with details for Forest City’s land cost.

As for R&F, a very high-density project is in the pipeline, with the company planning to launch 15 blocks in the first phase. The six plots it bought from the Johor Sultan last year came with a high plot ratio of 1:10.

Industry observers say the plot ratio can be further extended to 1:13.

R&F plans to develop high-rise residential units, retail properties, offices, hotel and a shopping mall, all of which will be on a saleable floor area of about 3.5 million sq m, which is close to 10 times the floor space of the Petronas Twin Towers in the capital. 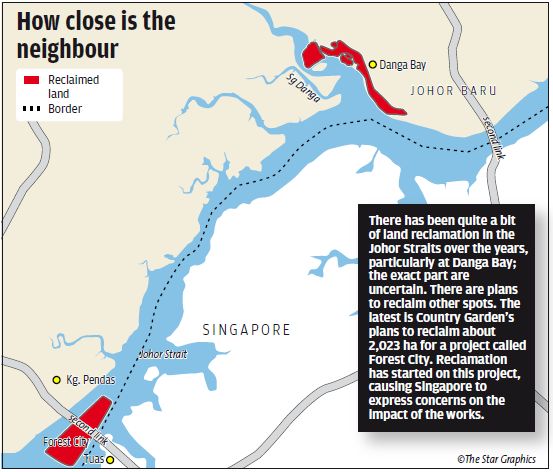 Local developers are starting to feel the pressure following the massive developments by the Chinese developers.

But the developers from China are optimistic that Johor will be akin to Shenzhen and the units being built would eventually be taken up.

Says Yuen: “It takes Shenzhen 20 years to where it is today... so we expect for it to take some time for Johor to develop into the same status.”

But Iskandar Malaysia, which is almost three times the size of Singapore, is already being positioned as the Shenzen of Hong Kong. Shenzhen is about twice the area of Hong Kong.

The Chinese are investing in Malaysia because of political stability, potential from the Singapore spillover effect, low cost of entry, cultural similarities, language and also partly due to the slowdown of the property market in China.

The developers, especially listed companies, come to Malaysia because it is still considered one of the most affordable countries in the region.

“Take Vietnam as an example, the recent (anti-China) riot shows that there is a considerable political risk to invest in the Indo Chinese nation,” one developer explains.

As for the Philippines, the political relationship is not amicable over the years.

Singapore, on the other hand, is expensive.

Betting on Iskandar Malaysia as the next Shenzhen, Johor becomes a natural investment choice for China developers but it is also the very same reason that Malaysia has to strike a balance to maintain a congenial relationship with Singapore.

That said, the sustainability of Iskandar Malaysia is in question due to supply far outstripping demand.

Currently, Iskandar Malaysia has a population of 1.6 million while Singapore has 5.4 million.

Shenzhen’s population is a whopping 11 million while Hong Kong’s has 7.2 million.

That leads to another question: Who will take up the massive supply of houses in Iskandar Malaysia and Johor Baru?

Who are the buyers?

While there are rumours that Country Garden has employed a “buy-one-free-one” approach to lure Chinese buyers, Yuen outright denied such talks.

One commercial banker tells StarBizWeek that many of the purchasers from China who buys into Malaysian properties fall into the middle-income level.

Their profiles range from small business owners, teachers to executives.

“To them, Malaysian properties are very cheap. Some of them do not even bother to take up loans due to the lengthy process of approval.”

He says such buyers will opt to buy in cash and the property prices here are much cheaper compared with those in their homeland.

Some buy the houses as investment while others buy for their children, so that when they send their children here, there will a place for them to live.

“Other countries like Australia, Singapore and Hong Kong are too expensive for the middle-income Chinese buyers while in Thailand, foreigners cannot own property there,” he explains.

Depending on the bank, the process to approve the loans may vary.

He says normally foreign buyers can get 50% to 60% loan of the total purchase price and banks may request for the foreign buyers to deposit few more months of instalments upfront.

“To prevent the risk of default, banks are usually more cautious with the approval process as the checking of the income statement can be different from the local buyers.

“Some banks may also perform a credit checking on the buyers in their country,” he adds.

It is usually easier for buyers to borrow from the developers’ panel banks, which can also be a local bank.

As for Country Garden, analysts say the company raises bonds in Hong Kong and utilise the funds for its expansion overseas.

While listing can be another way of raising funds, in Country Garden’s case, analysts opine that floatation of its Malaysian unit is unlikely to happen in the near-term.

As for project execution, industry players note that besides developers from China, many contractors from the mainland are also moving into Malaysia.

However, Country Garden’s Yuen says it engages with mostly local contractors for its projects in Johor and hired an Australian consultant for the gargantuan reclamation works.

So far, Country Garden has the most number of notable projects in Malaysia. R&F is fast gain prominence with its launches in a big way.

Country Garden’s Danga Bay project has a gross development value of RM10bil while its projects in Semenyih and Serendah are estimated at RM3.5bil jointly. It also has the major capital commitment for the land reclamation works for the Forest City off the coast of Pendas, Johor.

Some quarters are concerned that the property growth in China will have an impact on the Chinese developers that have venutred into Malaysia following reports of property bubbles in some of the cities in China.

John So of RHB Research who is based in Hong Kong tells StarBizWeek that the perception that there is a property bubble in the third and fourth-tier cities in China is a “simplistic view”.

“The national home sales (of China) has gone down 10% for the first five months while developers like Country Garden and Evergrande Real Estate Group have experienced robust growth for the same period,” he says.

He notes that sales in certain tier-one and two cities have slowed down by some 20% and it will be impacted by affordability and demand.

The issue of funding