It immediately hit the nail on the head for the 33-year-old businessman. He knew that Soft Space, a company he started two years ago to create an application that could turn smart phones into point of sale (POS) for credit cards with an additional device, had arrived.

Soft Space, a company that began with a team of four people, now covers 90% of the entire mobile POS volume in Thailand. This is largely attributed to Soft Space’s first client – Kasikorn Bank – the fourth largest Thai commercial bank in terms of total assets, loans and deposits.

While mobile or wireless technology has long permeated the business environment in many advanced countries, it has gained traction in Malaysia recently. It is replacing the businesses that are built on the mouse and click model.

A combination of wireless broadband, cloud servers and proliferation of smart phones has paved the way for the rise in small and nimble start-ups with applications that are fast replacing the incumbents. Like other markets, it’s not the established big-guns with financial clout that are driving this change. Instead, it’s the flexible and nimble technology start-ups that are beginning to have an impact on the market.

“When it comes to technology, start-ups always move faster because they are more agile,” he tells StarBizWeek, noting that organisation culture and the market will dictate how fast a company moves and adapts.

He notes that while established corporations have the financial strength to pursue ideas and execute them as well as a track record, the only ammunition for start-ups is their technology and ability to innovate quickly.

MyTeksi general manager Adelene Foo concurs, saying small companies know they have to out-innovate their competitors and sustain a growth trajectory while managing tight funds. Big companies, on the flip side, have to strive against their own size to innovate faster and be in touch with their customers or market needs.

“Competition keeps us in check and pushes us to continue to innovate,” she says, citing the face-off between Apple and Samsung on the smart phone and tablet fronts.

The local start-up scene is thriving as more technopreneurs rise to create new products and services, providing solutions to issues that are sometimes overlooked or long-accepted as the norm.

Soft Space, which has grown from a team of four to 60 including interns, has a mission to make card payments mobile and accessible to all business owners.

The two-year-old tech company’s brainchild enables small time merchants to accept card payments without having to worry about the costly monthly fees and installation of the credit card terminals.

“We’re working to go beyond the e-wallet or online payment, we now have mobile card payments, next we want to roll out contactless payment solutions,” Chang says.

He adds: “All things revolve around your mobile phone these days. As the usage of mobile devices gain more traction, I can see that habit being applied in so many sectors, like healthcare.”

Soft Space is a success story, when it comes to Malaysian tech start-ups. As of end-2013, it has already broken even, barely two years into operation. 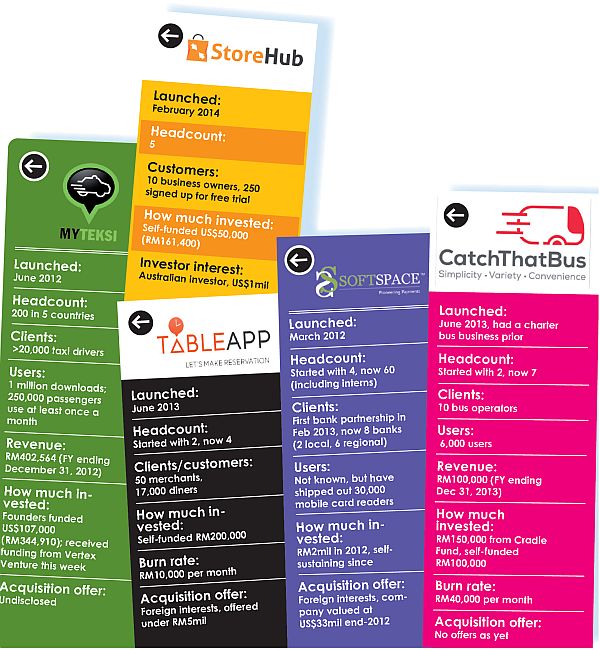 In its first year, it only managed to secure a partnership with Thailand’s Kasikornbank to roll out its solution. Since then, it has worked its way into seven more partnerships with another Thai bank, two Vietnamese banks, one Indonesian and one Australia-New Zealand bank.

Locally, its breakthrough was with CIMB Bank while Hong Leong Bank came on board later.

Chang declines to reveal the company’s revenue. He says: “Soft Space through Kasikorn Bank has processed RM1bil worth of transactions to date.”

MyTeksi, the for-profit social enterprise, has set out to address the public’s need for efficient and safer taxi services in Malaysia.

In the five areas it operates locally - Klang Valley, Seremban, Malacca, Johor Baru and Kuching – 50% of the taxi drivers are already using its mobile application.

Foo claims there is one booking made every two seconds on average.

Regionally where the application is known as GrabTaxi, the company has already set foot in Singapore, Thailand, the Philippines and Vietnam. It continues to eye more cities in Malaysia and new markets in South-East Asia.

GrabTaxi, which has a workforce of 200 people in five countries, was founded by two Harvard Business School graduates. One of them is Anthony Tan, the 32-year-old grandson of Tan Sri Tan Yuet Foh who is the co-founder of the Tan Chong Motor group of companies.

Foo says that within the shift in social pattern and trends towards mobility and cloud space was a resurgence of enterprise solutions.

“People are increasingly looking at how to revamp or move their operations onto mobile platforms,” she says, adding that the proliferation of mobile device usage has hit 60% to 70% in Malaysia this year.

This is where StoreHub Sdn Bhd co-founder and chieftain Fong Wai Hong comes in.

The 28-year-old go-getter, who set up online retail store OzHut in Australia and grew it into a business of A$5mil in revenue by the fifth year, has now brought his entrepreneurial skills to Malaysia. Doshi (left) and Jeyapalaysingam founded Catch That Bus in 2012.

Fong along with Shanghainese co-founder and chief technology officer Congyu Li have designed a cloud-based POS system on the iPad which not only includes the order-taking and cashier platforms but also features to track inventory, review staff performances and manage customer relationships.

Imagine a business owner of two cafe outlets: StoreHub’s application allows the employees to run these outlets on iPads, while the business owner can manage the two outlets also from an iPad based on real-time transactions and other comprehensive data.

Fong says the StoreHub application is targeted at small and medium businesses. “Where the cost of installing a traditional POS system at one outlet could cost between RM5,000 and RM20,000, not including regular maintenance costs. We are offering StoreHub between RM120 and RM449 per month for one iPad licence, depending on the size of the business,” he says.

A subsequent iPad licence costs RM89 per month each, making the cost of using StoreHub cheaper than the conventional POS system.

Although the application has only 10 users since its launch in February, there have been 250 sign-ups for its free trial.

“We got 250 sign-ups in four days. We are quite confident of securing 10% to 20% of them as new customers after they have tried StoreHub,” Fong says.

StoreHub’s team of five, targets to hit 200 customers in six months, with plans to expand to Singapore, China, Australia and Indonesia in six to 12 months. “This business is fairly scalable,” he points out.

The Expedia of buses, Catch That Bus Sdn Bhd is making the bus industry in Malaysia more transparent, trustworthy and reliable.

Self-proclaimed as an aggregator of bus operators for charter and express buses, Catch That Bus addresses the problems of unavailability of tickets, and the inconvenience in ticket purchasing.

Founded in 2012 by chief executive officer Viren Doshi, 33, and chief operating officer Ashwin Jeyapalaysingam, 33, the company has already clocked some 5,000 to 6,000 commuters through their platform since the express operations began in June 2013.

“The bus industry is fairly hazy in the sense that there’s no transparency in price and services. So basically that’s where we come in. We do the screening process and partner with bus operators that have a good track record. The industry is fairly price-driven, so we help people look for the cheapest deals,” says Doshi.

Catch That Bus has 10 bus operators on board, and will be adding five to six new operators soon.

Using the Catch That Bus platform, customers are able to view all options in terms of time, costs, type of bus, location and amenities.

The tech start-up space is not limited to public transportation and payment platforms, but it extends to the food and beverage industry.

“It provides more time for the restaurant owner to manage his or her business,” he says.

He considers the business as an-online-to-offline service provider, instead of a “typical” tech company. “We bring online clients offline to consume. Together, we help the restaurants grow. For that reason, we believe the business is scalable. It is a win-win situation, because we won’t kill any businesses through our service,” he says.

Since operations began in June last year, Tableapp has successfully sent more than 17,000 diners to restaurants and Chang plans to reach the 20,000-mark in a month.

Its restaurant client base has grown to 50.

It now serves 75 food and beverage outlets and targets to add 500 more restaurants that can use its services by the end of this year.

Pioneers evolving with the times