LEE Yeow Seng, a name that the property scene will soon know very well, has recently shot into the limelight following his appointment as chief executive officer of IOI Properties Group Bhd

who is already a familiar face in the plantation scene, Yeow Seng, who was roped into IOI Corp Bhd back in 2008, has been kept behind the scenes up until news broke of IOI Properties’ relisting. 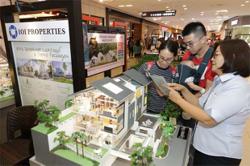