SMALL office and Home office (SoHo) property is definitely gaining momentum in Malaysia, particularly given the advent of information, communication and technology (ICT).

Tempo Properties Sdn Bhd chief executive officer Khoo Boo Hian says it’s definitely a budding trend given the working culture and the mushrooming of young entrepreneurs who tend to spend long hours at work or in the office.

“SoHo is becoming a trend in the market especially for young executives. The advantages of SoHo are convenience and flexibility as you can work and live within the same space,” he says.

Khoo says SoHo can either be perceived as a living area with complete office facilities and amenities such as a conference room, waiting lodge, business centre or an office space that provides all your out-of-office needs and privacy.

“You can also customise your SoHo suite to suit the functionality, performance and aesthetic aspects of your businesses. It allows young business owners a more private but compact and efficient space to express their brand and to grow their businesses,” he says.

“Our SoHo suites are designed in the form of a spacious duplex complete with residential and business amenities and we have received very positive feedback especially from our young urban customers – from couples, professionals to single working groups,” he says.

He says the place was formerly known as Cast Iron District which originally housed warehouses and factories and was famed for its cobblestone streets.

“Living in SoHo was deemed illegal during that time but in 1980s, the neighbourhood rapidly rose up the socio-economic scale due to location, lots of living space, the architecture and the fact that it was considered hip,” he says.

He says the SoHo trend in Malaysia started 4-5 years ago due to emerging young executives working in service sectors such as finance, insurance and real estate.

“As the new culture of working emerges that includes flexible working hours, limited service workers, connection all around the world and service-based business, SoHo has become a hit among these young executives.

He says among the critical success factors for SoHo developments are locations with good accessibility and amenities.

“Apart from that, buyers are also looking for such factors as design and functionality and also technology before they decide to purchase them,” he says.

is also another developer involve in the SoHo property development through CENTRIO at Pantai Hill Park in Bukit Kerinchi, Kuala Lumpur.

“Our SoHo at the CENTRIO concept comes after our research revealed that an increasing number of young people are looking for living spaces that offered greater flexibility, with many of them wanting to work from home,” says sales and marketing senior manager Jessica S.S. Loo.

She says the majority of them are from creative and entrepreneurial fields such as insurance, design, advertising, real estate and IT, where work will require them to be always on the move with no need for big office spaces.

“They are also looking for their first home, hence they will be drawn to a concept that allows them to work from home specifically designed with lifestyle flexibility in mind,” she says.

She adds that SoHo units at CENTRIO are really a success as 70% of the development was sold when they were opened for sales in 2006.

“Last weekend, we managed to sell all the remaining units of our SoHo units during our special promotion package that gives rebates up to RM150,000 to our buyers,” she tells StarBizWeek saying that CENTRIO offers a total of 238 units of duplex SoHo with build-up between 623 sq ft and 1,536 sq ft. 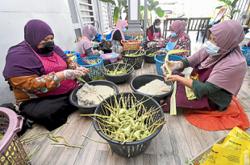