JOHOR BARU: Dubai-based Damac Holdings, one of the world's leading luxury waterfront developers, plans to build commercial and residential properties and a private marina with a projected gross development value of about RM3.8bil in Puteri Harbour, Nusajaya.

“Once the approvals come through, we hope to start by early next year,” he told a press conference after the signing of an agreement between Damac Properties and Nusajaya master developer UEM Land Bhd yesterday. 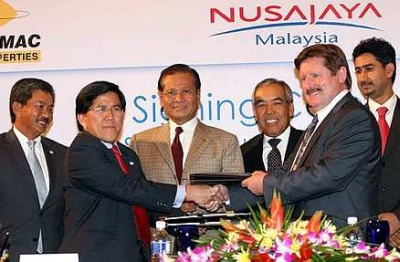 Under the agreement, Damac will pay RM397mil cash for three parcels of commercial land that form part of the 278.4ha Puteri Harbour development.

Riddoch said Damac chose to invest in Iskandar Malaysia as it felt the region had huge development potential.

“Our test marketing shows that many end users will be very excited to own properties in this region,” he said.

He expressed confidence that Damac's projects in and around Malaysia would add value as iconic developments and attract individual investors from the Middle East and the rest of the world.

UEM Land managing director Wan Abdullah Wan Ibrahim said there was a demand for luxury property in the region and the project also hoped to tap on opportunities from Singapore.

“We are barely 45 minutes from Orchard Road and the properties will be sold at a fraction of the cost in Singapore,” he said, adding that the development would complement and leverage on what was being offered in the island republic.