The shrinking appetite for Thai rice is worrying, as the grain is crucial to livelihoods and trade and as a daily staple in Thailand. - Bloomberg

BANGKOK, Jan 22 (The Straits Times/ANN): In 2022, Thailand’s Hom Mali rice lost its title of the World’s Best Rice to Cambodia’s Phka Rumduol grain, marking an embarrassing defeat for the crop often touted as the pride of the nation.

The Thai grain’s lack of fragrance – a deciding factor in its loss, according to one of the judges – spurred industry leaders to hurriedly launch an investigation into the matter. They ultimately chalked the defeat up to unfavourable weather conditions and inauthentic rice seeds, which diluted the variety’s distinctive aroma.

While the annual contest held at the World Rice Conference is just a friendly competition, the upset for Thailand, which was title winner two years in a row before this, underscores the growing rivalry in South-East Asia, where rice-exporting nations are racing to produce cheaper, better quality grain to gain more market share.

Worldwide, most rice produced is consumed domestically. Some rice-growing countries, such as China and the Philippines, which grow large quantities of rice, have to import the grain to meet local needs.

Up until the 2010s, Thailand had been the world’s top exporter of rice. But increased production from other rice-growing countries such as India and Vietnam, which now offer similar aromatic grains at higher yields and lower costs, has knocked it out of the top spot.

Now, India is the top exporter of rice, with Thailand and Vietnam alternating between the second and third spots. Together, the three countries account for a little over 60 per cent of the world’s rice exports.

Experts say Thailand has lost its competitive edge because of issues such as climate change, rising costs of production, materials and transport, and an ageing farming workforce. An appreciating baht has also kept Thai rice prices high, weakening export demand.

He noted, too, that the export varieties from regional neighbours have grown and improved in recent years, leaving buyers spoilt for choice.

“Most people cannot tell the difference between the different rice varieties, as long as it is soft and tastes good,” he said.

While the export prices of rice fluctuate throughout the year, Trea’s data earlier this week showed that Thailand’s Hom Mali is almost double the price of Vietnam’s premium fragrant rice, at US$883 (S$1,200) per tonne against the latter’s US$528 per tonne. Figures also show that Thai rice exports are generally pricier than exports from Vietnam and India in the white rice and parboiled rice categories.

Rice exporter Patcharee Lertpakornchai, 63, who sells rice to countries such as Bangladesh and Morocco, said the higher prices of Thai rice have made it less popular among buyers from developing economies.

“They ask me to source rice from cheaper countries. They are more concerned about the price,” she said.

The shrinking appetite for Thai rice is worrying, as the grain is crucial to livelihoods and trade and as a daily staple in Thailand.

The country’s rice fields are mostly concentrated in the north-east and central regions, and cover about 11.2 million ha, nearly 50 per cent of its farmland. There are about 4.9 million rice-farming households, according to government data.

Generally, Thai rice is rain-fed, meaning it relies on natural rainfall rather than irrigation. The planting season typically begins in May, which is the start of the rainy period, and rice is usually harvested at the end of the year.

But climate change has disrupted the natural schedule for rice cultivation.

Unusual weather patterns such as droughts and unexpected heavy rain have become more noticeable in the last few years, said Dr Atthawit Watcharapongchai, who is the local lead of an international project that focuses on sharing sustainable farming skills and know-how to about 20,000 Thai farmers.

According to the 2021 Global Climate Risk index, Thailand is among the top 10 countries most affected by extreme weather events over the last two decades.

“Hom Mali rice, in particular, is photo-sensitive, usually it will be ready for harvest at the same period every year. But lately, this harvesting period has become more unpredictable,” said Dr Atthawit, adding that prolonged humid conditions have also caused disease outbreaks, affecting healthy crops.

Productivity has also been stagnating, according to a 2022 report by a group of international researchers, where figures showed that Thailand’s average rice yield in 2019 fared worse than that of its South-east Asian peers. It produced just 2.92 tonnes of rice per hectare compared with Vietnam’s 5.82 tonnes per hectare and Cambodia’s 3.63 tonnes per hectare.

In terms of quality, Thailand’s neighbours have caught up, with their own versions of aromatic grain that can rival the Hom Mali variety, said Dr Paul Teng, an adjunct senior fellow at the S. Rajaratnam School of International Studies who is an expert on food security.

Years of research and collaboration with international organisations such as the Philippines-based International Rice Research Institute (Irri) have helped Vietnam and Cambodia develop cheaper, more productive strains that can better withstand drought and floods.

These strains, which sometimes bear similar genetic markers to the Thai varieties, are also equally fragrant, said Dr Teng who has done research and consulting work for the Irri and other international agencies such as the World Bank.

“Decades ago, Vietnam’s rice was like chalk compared to Thai rice... But they are now enjoying the fruits of their labour,” he noted.

There has been some attempt by the Thai government to increase research and development of new varieties of rice, and in 2020 Thailand said it would allocate 200 million baht (S$8 million) annually to the cause.

Mr Charoen said Trea is also working with ministries to test new rice varieties for growing, but it takes at least two to three years to fine-tune the cultivation process before they enter the domestic market, and eventually the export market.

“We have not had new varieties for export in decades. And it will take some time,” he said.

The government has also committed more than 80 billion baht in subsidies and income support for farmers, to ensure price stability and help them reduce the cost of production.

However, industry players said that ground-up initiatives that teach farmers sustainable and productive practices are more useful in the long term.

The Better Rice In Asia Initiative, which is backed by public and private partners, has helped Thai farmers adopt new farming techniques, improve rice yields and pick up business management skills, said Dr Atthawit. It has also helped farmers increase their net income by 20 per cent and reduce their greenhouse gas emissions by 21 per cent.

“(The farmers) are very much aware of climate change. And while it does take a while for them to see results, they are proud to produce more sustainable crops,” he said.

Banding together as a collective has also helped a group of 600 farming households in Thailand’s north-east province of Amnat Charoen to lower production costs and increase earnings, through sharing equipment and knowledge, and growing alternative crops, such as chilli, shallots and lemongrass, during the off-rice-growing periods.

Farmers who are part of this collective, known as the FTS Organic Amnat Charoen Community Enterprises Network, also have to abide by organic standards, which means engaging in practices that do not harm the environment, said Mr Bruno Fischer, 64, who is an adviser to the group.

“We have been around for 10 years, and farmers have grown confident in these methods,” he said.

Still, the increasingly volatile nature of the harvest cycle, an ageing farming population and the country’s overall development have reduced the number of farmers in Thailand from 70 per cent of the total labour force in 1980 to just 30 per cent in 2019.

It is not uncommon to hear anecdotal accounts of farmers or their offspring turning away from the back-breaking labour of rice farming to seek opportunities elsewhere.

Like many others his age, rice farmer Vichittra Saengthong’s 34-year-old son, who is a cook, is not keen to work on the family’s 2.5ha farm in Kalasin, a province in Thailand’s north-eastern region.

However, Ms Vichittra, 50, a second-generation farmer and the president of the Pensook Organic Rice Community Enterprise, is not worried.

This is because the Covid-19 pandemic has somewhat flipped the script, forcing young people to return to the farming towns after it devastated businesses and employment in the big cities, she said.

“Now they continue to stay here because expenses in the city are very high. And we have about 10 new people joining our network,” she said.

As a result of this new blood, the community enterprise, which has about 250 farmers, has started producing secondary goods, such as drinks and snacks made from rice.

“There are more jobs for young people here. This is an opportunity for them to work for themselves. Hopefully, we can improve the quality of life for all farmers, ” said Ms Vichittra. - The Straits Times/ANN 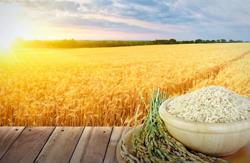