Rescuers carry the body of a victim of a coal mine explosion in Sawahlunto, West Sumatra, Indonesia on Dec. 9, 2022. The blast, caused by noxious gases including methane killed 10 miners while four survived. -AP

* Govt will remain consistent in fight against corruption, says Anwar

* Unemployment in October lowest since start of Covid-19 pandemic

* Beach Road murder: Suspect to be remanded for psychiatric observation

* Selangor DOE detains three containers with ewaste from US, Spain

* We are sorry for your loss, says family in flat blaze that led to firefighter’s death

* US pledges to expand economic ties with Laos

* Xi: China to step up cooperation with Egypt, Palestine

* ‘Honest grandma’, 92, repays US$3mil in debt in 10 years after refusing to declare bankruptcy wins ‘most beautiful’ citizen award in China

* 'It's dead out there': China's slow exit from zero-COVID

* Some in China bristle at Covid-19 rollback

* China seeks to tone down assertive diplomacy that 'backfired': US official 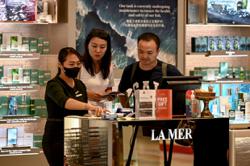