During an official visit to the Republic of the Philippines, National Assembly Chairman Vuong Dinh Hue (left) held talks with President Ferdinand Romualdez Marcos Jr in Manilla on Nov 23. — VNA/VNS

MANILA (Vietnam News/Asia News Network):National Assembly Chairman Vuong Dinh Hue on Wednesday (Nov 23) had a meeting with the Philippines' President Ferdinand Romualdez Marcos in Manila as part of his official visit to the country.

NA Chair Hue expressed his delight at his first visit to the Philippines, congratulating him on the successes of the general elections in May which elected Marcos as the 17th President of the country.

Hue said he believed that under the leadership of the President, the Philippines would continue to achieve more comprehensive development achievements and enhance its role and position in the region and the world.

The top Vietnamese legislator conveyed the greetings of Party General Secretary Nguyen Phu Trọng to President Ferdinand Marcos and extended the invitation of President Nguyen Xuan Phuc to invite President Marcos and his spouse to visit Vietnam soon, to which the Philippines leader expressed pleasure and said he would arrange to visit soon.

Informing the Filipino leader about the outcomes of his talks with the Speaker of the Philippines' House of Representatives, Hue said that Vietnam's policy is to constantly consolidate and promote the strategic partnership with the Philippines in all fields, adding that the two countries need to further promote relations across all channels of the Party, State, parliament, Government and people-to-people, especially as the two countries are close neighbours and share similarities in population sizes and development levels.

For his part, President Marcos said Huệ's visit marks another milestone in bilateral relations and thanked Vietnamm for having been a stable source of rice exports that help the country ensure food security amid global difficulties.

Agreeing with the Filipino leader's proposal to strengthen the exchange of delegations between the two legislative bodies, Hue said the two countries should expand cooperation not only in the fields of economy, trade and investment, national defence and security but also in other fields such as agriculture, science and technology, education and training, digital transformation, digital economy, climate change response, cybersecurity, green energy transformation, tourism, and people-to-people exchanges.

The two leaders said bilateral ties have been growing strongly in recent years despite the impact of Covid-19, especially with trade in 2021 reaching the highest level ever at US$6.8 billion.

NA Chair Hue also suggested the Philippines continue to treat Vietnamese fishermen humanely in the spirit of friendship and cooperation and enable them to return home to reunite with their families soon.

In the discussions related to multilateral cooperation, the two leaders were satisfied. They praised the close and effective coordination between the two countries at international organisations and forums in recent times.

The two sides agreed to share information, support each other, and contribute to strengthening Asean's solidarity, voice and centrality in common security issues in the region, including the South China Sea. 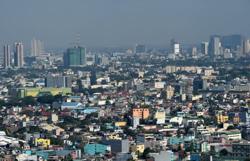