SINGAPORE (The Straits Times/Asia News Network): The ghostly blue glow that washed up on Singapore’s shores in March has been spotted off Singapore’s southern shores, in the open waters around Sentosa, St John’s Island and Raffles Lighthouse.

Sim, who is conducting research in Singapore’s marine microbiology, said that he spotted the wave of bioluminescent plankton during his monthly seawater sampling for his research.

“From the boat, we observed the same dense green blobs dominating the waters (in the morning) and with one quick look, I knew it was the same as the one we had in January and March 2022,” he said.

He and his team confirmed the identity of the “blobs” in the lab. He added: “To be honest, we weren’t really expecting it at all and so it was really a surprise for us.”

While it is unclear how long the glow will last, Sim said that based on the two previous blooms, this one is likely to last about a week.

“Certain sea conditions – such as low oxygen levels – can influence the longevity of a Noctiluca bloom and even make it more likely for a bloom to occur,” he said.

“But due to insufficient monitoring in Singapore, we are unable to draw direct conclusions on how long this bloom will last and when the next bloom will come.”

Sim added that those who want to see the bloom should head near the southern coast, like the beaches off Sentosa.

A hairstylist who wants to be known only as Mr Alan spotted the blue glow on Monday at around 7.30pm while out on a yacht off Sentosa with his friends.

While the washes of blue light have delighted Singaporeans, Mr Sim said that the frequency of such blooms of late have been “concerning”.

He added: “These blooms are usually quite rare, and over the 2½ years of my research, this is the first time that I’ve seen it bloom thrice within a single year.”

The microbial ecologist said that this may be a sign that Singapore’s waters may be changing, and that it may have far-ranging effects on marine life here.

For instance, if Noctiluca becomes the dominant plankton in the water due to changing water conditions, other microbial species which some fish depend on may be crowded out.

This may lead to an overall shift in the balance in Singapore’s marine ecosystem, resulting in effects that are not yet known, said Sim.

Ultimately, more research is needed to determine the exact link between water conditions and the frequency of such blooms, he added. 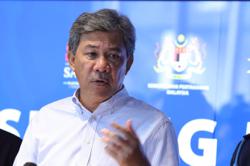