HANOI (Vietnam News/Asia News Network): Spokeswoman of the Ministry of Foreign Affairs (MoFA) Le Thi Thu Hang said the Vietnamese authorities are working closely with the relevant agencies in Cambodia to deal with the issue of Vietnamese people tricked or lured to Cambodia for illegal work.

At the ministry’s regular press meeting in Hanoi, she said the issue had come to light recently and was attracting attention.

She noted Vietnam’s representative bodies in Cambodia were keeping a close watch on the situation and were maintaining contact with the Vietnamese community.

In addition, they had coordinated with the Cambodian authorities to increase monitoring, expand the investigation and rescue Vietnamese nationals tricked or lured into work illegally in Cambodia.

The foreign ministry and domestic agencies also coordinated to quickly handle necessary procedures for repatriating the citizens, Hang went on, adding that more than 1,000 citizens had been rescued and returned to the homeland.

Meanwhile, thousands of others had been assisted in handling procedures.

Ministries, sectors, and localities had also increased awareness campaigns that call on people, businesses, and factories to adhere to laws and prevent Vietnamese people from being tricked or lured into working illegally in other countries.

In the future, the foreign ministry and Vietam’s representative bodies in Cambodia would continue their close work with domestic agencies and the Cambodian authorities to rescue and repatriate those who were tricked or lured into illegal work there.

According to the spokeswoman, they will also take measures to ensure Vietnamese citizens’ rights and legitimate interests.

She noted that authorities would also continue coordinating with domestic media agencies to boost communications.

Regarding reports from Philippine authorities on a recent rescue of 14 Vietnamese nationals who were victims of human trafficking and incarcerated in Paranaque City, Hang said the Vietnamese Embassy in the Philippines was taking all necessary measures to protect the rights and legitimate interests of the citizens.

She noted that shortly after being notified, under the ministry’s direction, the embassy liaised with Philippine authorities and met the nationals to verify the information and take measures to ensure their rights and legitimate interests.

The spokeswoman cited the embassy as saying that, by Oct 5, 13 of the 14 citizens had been freed. The other has Covid-19 and is being cared for at a centre for protecting women’s and children’s rights in the Philippines.

Regarding the recent discovery of bodies washed ashore on Phu Quoc Island, the spokesperson said local and national authorities contacted the Chinese Consulate General in HCM City to investigate the case, as it was suspected they may be Chinese nationals.

Samples had been collected to identify the bodies, clarify the cause of the deaths, and deal with related issues in line with Vietnam’s legal regulations. 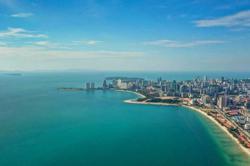