HANOI, Sept 25 (Reuters): Vietnam's gross domestic product is expected to grow 6.7% to 8.5% this year while inflation is to be kept below 4%, the State Bank of Vietnam (SBV) has announced.

The central bank said in a statement that it will continue to pursue "flexible monetary policy" to support economic growth while keeping an eye on inflationary risks.

Vietnam, a regional manufacturing hub, has rebounded from the pandemic backed by strong manufacturing and exports, but is also facing an upward pressure on inflation.

The central bank on Thursday announced a 100bps increase in its policy rates, after its governor said Vietnam's biggest economic challenge at present was to keep inflation under control.

The country has set an official target for a GDP growth of 6.0%-6.5% for this year, recovering from a decades-low expansion of 2.58% last year.

"The global economy has so far this year evolved in an unpredictable manner, with a rising risk of global economic recession," the SBV said, adding that it's a challenge for Vietnam to boost growth while keeping inflation under control at the same time.

Banks' total lending has risen 10.47% as of September 16 from end-2021, the central bank said. It said this year's credit growth will be 14%. (Reporting by Khanh Vu; Editing by Martin Petty) 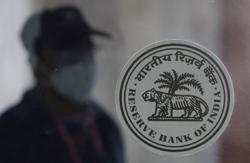