According to the Fire and Rescue Department (FRD), the fire had destroyed around 0.25 hectares of the forest before six firefighters from the Bangar Fire Station, led by ASO Yussof Jerudin, were dispatched to the scene, during which they put out the fire in 10 minutes.

They are also advised to ensure their homes are at least 50 metres from a forest or trees.

The public is encouraged to extinguish small bush fires without endangering themselves, and to call 995 for emergency. - Borneo Bulletin/ANN 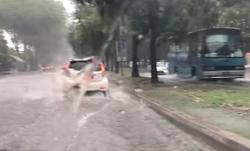