'I just wanted her to keep quiet,' says Singaporean on trial in UK for suffocating wife with pillow 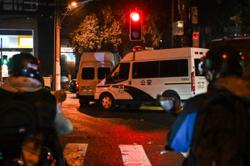 Fong Soong Hert said he had "no memory whatsoever" and had diminished responsibility for allegedly killing his wife. PHOTO: ALEXIS FONG via The Straits Times/ANN

SINGAPORE, Aug 2 (The Straits Times/ANN): A 51-year-old Singaporean accused of murdering his wife in a hotel while on holiday in Britain is said to have suffocated her with a pillow after she nagged at him.

Fong Soong Hert denied murdering Madam Pek Ying Ling, 51, and told the jury in Newcastle Crown Court that he had "no memory whatsoever" and had diminished responsibility for allegedly killing his wife, British broadcaster BBC reported on Monday (Aug 1).

Prosecutor Peter Makepeace said Madam Pek was unhappy with Fong as he continued to smoke while he was unwell on their trip.

Madam Pek was pronounced dead at the County Aparthotel in Newcastle at 7.32am on Dec 6, 2021.

The couple were on holiday and had plans to meet one of their sons.

The Straits Times earlier reported that the couple, who had been married for 27 years, have three adult sons in their 20s.

ST understands that at least one of their sons is currently in Newcastle for the trial.

According to the Daily Mail, the Newcastle Crown Court heard on Monday that on the night of the incident, Fong messaged their son, who was studying in a university in Newcastle.

Fong later told the police: "I just wanted her to keep quiet."

He denied murdering Madam Pek but pleaded guilty to manslaughter.

The prosecutor told the court that there was no known history of violence between the couple but that according to one son, Madam Pek was known to scold her husband.

Fong had injured himself in a fall during their stay on Isle of Skye, an island off the coast of Scotland, and visited a hospital.

He fell another three times after that in Newcastle, which led to Madam Pek "scolding him for not taking care of himself", said the prosecutor.

According to the BBC, Mr Makepeace told the court that Fong may have knelt on his wife’s shoulders during the attack to achieve the required force to kill her.

Madam Pek was found by emergency services lying with her legs hanging over the bottom of the bed and a pillow over her face, reported the BBC.

ST reported earlier that the couple left Singapore on Oct 24 last year and travelled to Abu Dhabi in the United Arab Emirates, Croatia and Scotland, before arriving in Newcastle, where they met their eldest son on Dec 3 that year.

The couple watched a football match between Newcastle United and Burnley, their youngest son told ST in an exclusive interview.

They had planned to meet their second and youngest sons during their trip, which would have concluded in Germany on Jan 13.

The trial started on Monday and is expected to conclude next Tuesday. - The Straits Times/ANN