The backpack-size remote-controlled vehicle can manoeuvre through drains and narrow tunnels to seek out suspicious items. - The Straits Times/ANN

SINGAPORE, July 24 (The Straits Times/ANN): There is a new participant in this year's National Day festivities, but spectators are unlikely to see it even as they are kept safe by it.

It is one of two devices new to the police force - a four-wheeled remote-controlled robot that can sniff out bombs, security threats and suspicious objects - but its work is done almost exclusively underground in drains.

While the robot tackles security on the ground, a drone works in the air to keep people safe - it is equipped with cameras and other sensors to scan high-rise areas during operations.

The devices, unveiled at a media preview at the Police Security Command (SecCom) on Thursday (July 21), will help reduce the workload and risk posed to officers who would normally inspect the grounds in person for threats before large-scale events.

Officers from SecCom, which is headquartered in Toa Payoh, conduct searches at major security event venues and ensure the safety of guests and important personnel.

They can face hazards during inspections of locations such as telecommunication cable tunnels, drains and manholes, where they can be exposed to pollutants or harmful gases, said the police in a statement. 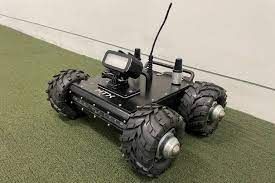 The backpack-size remote-controlled vehicle (RCV) can be fitted with a range of sensors and equipment and can manoeuvre through drains and narrow tunnels to seek out suspicious items.

The vehicles have been deployed at security events such as the May Day Rally, the Shangri-La Dialogue and National Day events.

In a demonstration on Thursday, an RCV was driven through a drain to scan for potential threats. The device was fitted with a GoPro camera, which provides its operators with a wider view than the standard camera that is housed in its chassis.

An officer controlled the RCV from a computer and kept watch through a live camera feed on the screen.

The Home Team Science and Technology Agency (HTX), which developed the devices with SecCom, said the analytics software loaded on the computer quickly pinpoints any anomalies detected.

The software will get increasingly better at flagging suspicious items as the artificial intelligence is fed with more images of objects to look out for, said HTX.

Other RCV units shown were equipped with bright light-emitting diode lights for better visibility and ball bearings fixed to the sides of their wheels to increase manoeuvrability through tight spaces.

Their tyres can also be switched out depending on the terrain where the mission is set.

SecCom also presented its new drone - a laptop-size device equipped with cameras to inspect rooftops and other high-rise locations.

Deputy Superintendent of Police Winston Yim, who oversees the SecCom operations involving the robots, said: “Previously, if we need to inspect rooftops, we would have to coordinate to ensure the safety of our officers when going up to each rooftop. This can take hours.

“Now, a drone can help us to scan the environment quickly, and we can then go up if it sees something suspicious. The work is more efficient.”

He added that both devices can help to save more than half of the time usually spent in searches.

Due to operational secrecy, further details such as the devices' specifications and prices are kept confidential. The RCV has been under operational trial since 2019.

The devices add to the police's fleet of robotics, including drones that are used in crowd management operations and search-and-rescue missions.

A robotic dog called Rover-X that is used by the police and Singapore Civil Defence Force in search-and-rescue missions was also unveiled earlier this year. - The Straits Times/ANN