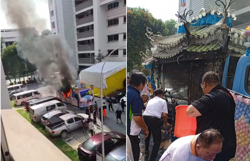 Two police officers rescued the two toddlers who were found conscious in the living room, before SCDF arrived. - ST FILE

SINGAPORE (The Straits Times/Asia News Network): The two toddlers who were alone at home when a fire broke out in a Housing Board flat in Marsiling last month have been referred to Child Protective Service (CPS), said the Ministry of Social and Family Development (MSF) on Wednesday night (July 6).

Responding to queries from The Straits Times, an MSF spokesman said CPS is investigating the case and is looking into whether the family requires additional support.

The Singapore Civil Defence Force (SCDF) said in a Facebook post last month that it was alerted to the fire at Block 218 Marsiling Crescent on June 22 at around 10.40pm.

The fire, which involved contents of a bedroom, caused the entire unit to be affected by heat and smoke damage.

ALSO READ: Residents rush to help when they learn of toddlers in burning Marsiling flat

Two police officers rescued the two toddlers, who were found conscious in the living room, before SCDF arrived.

The toddlers' parents declined to comment, but told ST two days after the fire that their children were recovering well.

Lawyer Ivan Cheong, a family law specialist at Withers KhattarWong, said CPS is involved when there are allegations of child abuse or suspicion that a child's welfare is not being adequately protected or looked after by his parents.

"CPS then steps in to interview the relevant caregivers, assess the situation and make recommendations to the court. A safety intervention plan could also be put in place pending the outcome of the investigation," explained Cheong.

He noted that such investigations can take a few weeks to a few months and the children may not necessarily live apart from parents during this period.

After investigations have been completed, CPS may apply to the court for the relevant orders, which may result in the children being removed from the care of their parents, said Cheong.

"They may be placed in the care of other competent caregivers until the children's safety and welfare can be assured," he added.