It was the first race for the Corgi dogs, aged three months and older, and took place at Hồ Xuân Hương Gymnasium in District 3, HCM City, over the weekend. The event was held for over an hour, attracting more than 70 contestants and hundreds of spectators.

"It [Cat] is very active," said Minh Trung, owner of the champion. "It runs around the house with me every day."

The event was held by Glow Inc For Paws, a professional pet care system that connects the pet-lover community.

Aside from the Corgis, other breeds such as Poodles, Phoc Socs, Chow Chows, and Dachshunds came along to make friends and watch the race.

The race had six qualifying rounds and one final round. Before the judge blew the whistle, the dogs were placed in the cage. Once the race started, dogs with unusual names such as Lé, Romand Teo and Meo ran with all their might towards the finish line.

Đinh Công Tuấn and his dog won the second prize.

However, many dogs simply chose to lie down and rest when they were just a few yards from the finish line, leaving the audience in hysterics, as organisers rushed to find the lazier dogs a place to relax.

An organiser said that the race would be held in other cities and provinces with the participation of many other dog breeds in the future. 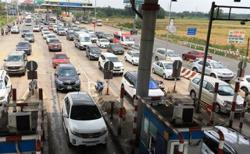