Wang, who was attending the inauguration ceremony of Ferdinand Marcos Jnr on Thursday, said the Philippines was a priority for China’s diplomacy.

“The Chinese side has always placed the Philippines as a priority in its neighbouring diplomacy, and looks forward to working with the new Philippine government to carry forward friendship, enhance mutual trust, and continue cooperation, so as to usher in a new ‘golden era’ for China-Philippines relations,” Wang was quoted as saying by Xinhua.

The two nations should “adhere to the proper handling of disputes and jointly safeguard the peace and tranquillity of the South China Sea,” he said.

China and the Philippines have been at odds for years over the South China Sea. Beijing has claimed sovereignty over almost the entirety of the waters, which are also claimed by Vietnam, Malaysia, Brunei and Taiwan.

During his election campaign, Marcos said he would negotiate a deal with Beijing to resolve their territorial dispute in the South China Sea.

According to observers, the election of Marcos may come as a relief to China. Beijing has enjoyed warmer ties with Manila over the past six years under Duterte’s China-friendly policy, with Beijiing offering several billion dollars in investment – including railways, roads and bridges.

But the Philippines government announced last week the termination of talks between the two nations over a joint energy exploration deal they signed in 2018, citing constitutional constraints and sovereignty issues as the reasons. The move could allow Marcos to pursue exploration opportunities with other countries.

Marcos has said he would use a 2016 UN arbitral ruling to assert the nation’s territorial right over the South China Sea, vowing his administration will not compromise on sovereignty issues. That ruling rejected Beijing’s historical claims to the disputed waters – a decision denounced by Beijing.

“In the face of the epidemic, China and the Philippines have helped each other and overcome difficulties together, and the resilience and vitality of the relationship between the two countries have become more and more evident,” Wang was quoted as saying.

Wang said he hoped the former president would continue supporting the development of China-Philippines relations.

During the inauguration ceremony, Marcos said his commitments included keeping up infrastructure projects for the Philippines and cleaning up plastic waste. 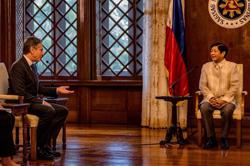