Parents are relieved to have their children back in school. - China Daily

Primary and secondary schools started allowing students back, as infections subsided in the capital.

They had been attending classes online since May 1, when the city battled its worst outbreak since the early days of the pandemic.

There were almost 100 cases daily at that time, as the authorities swiftly locked down communities or sent close contacts to centralised quarantine. Restaurants were also banned from offering dine-in service.

Parents told The Straits Times that they were relieved to have their children back in school.

"I've been quite distracted at work because I take my daughter along to the office, and she constantly needs my attention," said human resource manager Duan Yimei, 37, whose child is in Primary 3.

Li Jingyi, who works in finance, has been worried that her Primary 4 son was losing out to his more well-resourced classmates when schools were shut.

"I've arranged for my parents, who live in Shandong province, to come to Beijing to help me take care of my son, but they cannot help with his schoolwork," said Li, 39.

On Monday, Beijing party secretary Cai Qi said at the opening of the capital's 13th Party Congress, held once every five years, that the city will continue to "control quickly and block the epidemic spread".

Ways will include promoting regular nucleic acid testing and strict inspections on entry into residential communities, public places and offices.

But there was a stir when Communist Party paper Beijing Daily reported him as saying: "In the next five years, Beijing will persistently grasp the normalisation of epidemic prevention and control."

Netizens were quick to react on microblogging platform Weibo, complaining that they cannot imagine living under the tight Covid-19 restrictions for another five years.

The phrase "in the next five years" was removed subsequently from the media reports.

Beijing Daily's editor Zhao Jingyun clarified on his WeChat account that a reporter had mistakenly included the phrase, although it was not said by Cai.

In his post, he included a link to an article by former Global Times editor Hu Xijin that showed a photo of Cai's original report, which did not have the phrase when he talked about Beijing's Covid-19 controls.

The restrictions in Beijing were tightened after an outbreak at Heaven Supermarket bar threatened the progress that the authorities had made with the latest wave of infections.

A total of 369 reported cases were linked to the bar before the authorities declared on June 18 that the transmission chain had been broken.

But bars around the city remain closed, and eateries had to slash capacity by half, according to officials on Saturday.

The authorities have also updated Beijing residents' health code apps to show prominently their last nucleic acid test results during entry checks. Test results within 72 hours are required for entry into public places, including the subway.

On-demand drivers have also stepped up checks to ensure that passengers scan their health codes and have valid test results before driving off.

Meanwhile, during Shanghai's Party Congress on Saturday, party secretary Li Qiang said the government was "completely correct" to implement tough lockdown measures for two months earlier this year. "History will remember those who guarded and sacrificed for this city," he added.

Li had faced public criticisms for his handling of the outbreak in Shanghai, during which residents were not allowed to leave their homes to buy food or seek medical care. The measures resulted in protests in residential estates and online.

The lockdown, which started in early April, was eventually lifted in phases, and the authorities said dining in will be gradually allowed from this Wednesday.

On Monday, the National Health Commission reported 106 new coronavirus cases nationwide for Sunday - comprising 39 symptomatic cases and 67 asymptomatic ones. It was a drop from the 116 infections on Saturday. 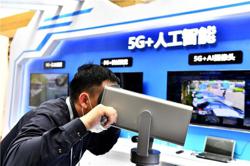