Relatives of a victim of the government's drug war carrying a box containing the remains after they were exhumed at Bagbag Cemetery. - AFP

MANILA (AFP): Six years after four policemen burst into her Manila slum shack and shot dead her husband and teenage son, Mary Ann Bonifacio fears for her own life as she fights for justice.

Bonifacio is pursuing the men in court in the hope of proving they unlawfully killed her loved ones -- a rare example of officers tasked with carrying out Philippine President Rodrigo Duterte's drug war facing trial.

Official data show more than 6,200 people have died in police anti-narcotics operations since Duterte swept to power in 2016 promising to rid the country of drugs.

But rights groups estimate tens of thousands of mostly poor men have been killed by officers and vigilantes, even without proof they were linked to drugs.

While the crackdown has been widely condemned and sparked an international investigation, only three policemen have been convicted for killing a drug suspect.

Lawyers say most families are too scared to go after their relatives' killers or do not have the money or time to pursue a case in the Philippines' creaky judicial system.

For Bonifacio, who has five other children, the decision to take legal action meant giving up a normal life.

Fearing the officers, who are on bail, or their supporters could go after her and her family, Bonifacio has moved house several times and is always looking over her shoulder.

"There is that possibility (of being killed)," she said, appearing older than her 48 years.

Bonifacio, who washes clothes and cleans houses to make ends meet, added: "I also have to think about my children's safety."

She filed a criminal complaint for murder in 2017, insisting her husband Luis, an unemployed decorator, and son Gabriel, a waiter, were not involved in drugs and were unarmed when police opened fire.

But it took the Ombudsman four years to bring the lesser charge of homicide against the policemen after finding their actions "went beyond the call of (self-) preservation".

The officers said they acted in "self-defence" after the men shot at them, and have asked the court to dismiss the case for lack of evidence.

In court, Bonifacio sits next to the accused killers due to a lack of space. The men are set to give evidence on August 9.

"I do not wish them dead. I want to make them understand that what they did was wrong and ensure they will not do it to other people again," Bonifacio said.

But accessing evidence held by the police, the same institution that prosecutes the drug war, is a major stumbling block, Bonifacio's lawyer Kristina Conti said.

"For these kinds of crimes, the burden of accountability cannot simply fall upon the victims or survivors," Conti added.

Raquel Fortun, one of only two forensic pathologists in the Philippines, has been working with a Catholic priest and families to gather evidence she hopes could be used in court.

She has been examining some of the exhumed remains of drug war victims whose bodies are being removed from temporary burial sites and cremated.

Her findings cast doubt on the most common police claim that suspects "fought back".

"I'm seeing some cases where you've got gunshot wounds on the wrists, on the forearms, on the hands, and these are what we would typically call defence-type injuries," she told AFP.

"So instinctively that individual must have put up an arm, a hand. So how can that person have fought back?"

At the height of the drug war, Bonifacio said killings happened almost "every night" in her hardscrabble neighbourhood.

Her traumatised youngest son, now 13, often wakes up crying from nightmares about being chased by police trying to kill him.

He turns off the television when Duterte appears, and runs away when he sees an officer.

The family lock their front door from early evening, get off a bus if a man resembling a policeman boards, and makes only brief visits to the cemetery in case someone attacks them.

Bonifacio said the policemen who shot her husband and son should have followed "the proper process" in what the authorities described as a drug sting operation.

But she also blames Duterte for ordering them to kill suspects.

"I think he should go to jail as well," she said.

Duterte, who will lose his protection from prosecution when he steps down as president on Thursday, openly ordered the police to kill drug suspects if officers' lives were in danger.

He has said he hopes his successor, Ferdinand Marcos Jr, will pursue the crackdown that Duterte admits failed to wipe out drugs.

"We continue to suffer the drug problem. It won't go away because of the lure of billions for traffickers," the outgoing leader said recently.

Duterte has refused to cooperate with an International Criminal Court probe into the crackdown.

Justice Secretary Menardo Guevarra told the United Nations Human Rights Council in March that his office had reviewed around 300 cases of drug war operations that led to deaths.

So far charges have been filed in five of them, he told AFP Thursday.

Bonifacio is determined to continue her own quest for justice, if only to prevent another family from experiencing her anguish.

"We will continue to fight," she said. 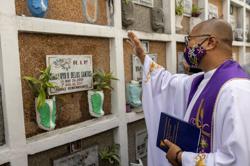