Corroding steel walls of the grounded naval ship BRP Sierra Madre at the Ayungin shoal on June 21 one of the nine stations guarding the West Philippine Sea. INQUIRER/ MARIANNE BERMUDEZ

AYUNGIN SHOAL, West Philippine Sea (Philippine Daily Inquirer/Asia News Network): China is closely watching this patch of reef, one of the maritime features occupied by the Philippines in the West Philippine Sea, as if ready to seize it at the earliest opportunity to establish firm control over that part of the South China Sea.

The Inquirer saw up close how the Chinese acted as if they already owned the place during a rare opportunity that it was allowed to observe the Philippine military’s rotation and resupply (RORE) mission to some of its detachments in the Kalayaan Island Group (KIG) in the Spratlys archipelago.

The military uses Philippine Navy vessels for its RORE missions to its nine outposts in the West Philippine Sea but not at Ayungin, where a pair of 24-metre wooden boats perform that task to avoid raising tensions with the presence of gray ships.

Ayungin is a low-tide elevation about 194km off Palawan province, well within the Philippines’ 370-kilometer exclusive economic zone (EEZ).

The Sierra Madre was deliberately grounded on the shallow reef in 1999 and has since been manned by a small contingent, the military’s eyes and ears at the shoal.

The 26-hour trip to Ayungin by the two supply boats—ML Unaizah May 2 and ML Unaizah May 3—from Ulugan Bay in Palawan was mostly uneventful until Chinese vessels showed up early morning on June 21 when they were about two hours away from the shoal.

From just a tiny dot on the horizon, the China Coast Guard (CCG) ship with bow number 4302 quickly closed in on the starboard bow of Unaizah May 2 and manoeuvred toward the boat’s port beam. It shadowed the boat for several minutes and came as close as 150m to it at some point.

The crew of Unaizah May 2, where the Inquirer was onboard, seemed to be unfazed.

“We’re used to it. What are they going to do with a mere boat?” said the RORE mission head Lt. j.g. Dennis Dante.

A voice from the CCG ship crackled on the VHF (very high frequency) marine radio, telling the supply boats and two Philippine Coast Guard (PCG) multirole response vessels in the vicinity that they were in the area of jurisdiction of the “People’s Republic of China.”

In response, one of the two PCG vessels countered that they were within the Philippines’ EEZ.

Moments later, the CCG made another call: “Philippine supply vessels, we are allowing you to proceed on your mission to bring food supplies provided there are no construction materials.”

The Filipinos replied: “This is a resupply boat tasked by the Philippine government to bring regular provisions to the troops stationed in BRP Sierra Madre.”

CCG 4302 then sped toward the two PCG vessels around 11 km southwest of the boats as if to stop them from coming closer to the supply boats heading to the Sierra Madre.

About an hour away from the shoal, another CCG ship, with bow number 5304, appeared on the starboard bow and sailed toward Unaizah May 2’s port beam. It stayed as close as 150 m from the boat until it could no longer follow it to Ayungin’s shallow waters.

Two Chinese maritime militia vessels were anchored on the northeast entrance to the shoal but they did not interfere with the boats.

Troops from the Sierra Madre cheered and waved with excitement as the boats approached them.

As they transferred the supplies using ropes and pulleys, CCG 5304 sat at the shoal’s entrance watching the Sierra Madre.

The Chinese appeared to be less hostile toward this week’s resupply mission, compared to recent occasions, which had prompted Manila to lodge diplomatic protests, the Inquirer was told.

“You’re lucky that the Chinese cooperated this time. If you had been here in the past months, you surely would be stressed,” said one boat crew member.

In April, the Chinese blocked the usual entrance of the supply boats by dropping fishing nets and buoys and then offered to guide them through a different route to get to Sierra Madre.

In November, two supply boats—which the Chinese accused of carrying construction materials—aborted their mission and were forced to return to the mainland after CCG blasted them with a water cannon.

Last month, the CCG deployed two rubber dinghy and closely followed the supply boats inside the shoal while taking photos and videos, the Inquirer learned from another crew member. The Chinese boats were able to get as close to 500 m to the Sierra Madre.

The Chinese ship manoeuvres, radio messages and monitoring of the supply activities showed up close how China is asserting its claims to these waters in the long-simmering maritime dispute between Manila and Beijing.

By asserting full control over the shoal and the flow of supplies to the Philippine outpost, and interdicting or disallowing some types of materials from reaching it, China may be trying to wear out the resolve of the government and the military in holding on to Ayungin so it would no longer appear viable for Filipinos to do so in the long term.

Ayungin is about 37km northwest of Panganiban (Mischief) Reef, also within the Philippines’ EEZ that was seized by China from the Philippines in 1995. It is now one of its biggest artificially built islands in the Spratlys. The island base has a 3-km airstrip, missile shelters, hangars and radars.

Under the 1982 United Nations Convention on the Law of the Sea, coastal states are allowed an EEZ of up to 370km from their shores. China is claiming Ayungin even though it is 1,285km from Hainan, its southernmost province.

The 2016 arbitral ruling, which invalidated China’s nine-dash line claims to nearly the entire South China Sea, explicitly stated that Ayungin was within the Philippines’ EEZ.

In addition to the Philippines and China, Brunei, Vietnam, Taiwan and Malaysia have overlapping maritime claims in these waters.

“The fact that we are still there is evidence that they do not yet fully control the area. That’s why they want us to leave.”

Maritime law expert Jay Batongbacal, who heads the University of the Philippines Institute for Maritime Affairs and Law of the Sea, said Ayungin had the same features as the “big three” of China’s seven artificial island bases—Panganiban, Kagitingan (Fiery Cross) Reef and Zamora (Subi) Reef.

“It has a very large shallow reef area and almost fully enclosed lagoon, especially since it’s almost twice longer than Mischief Reef. It can be converted into a base in the future,” he told the Inquirer.

Although Panganiban was turned into a massive island, it remained “limited in terms of the number of assets and weapons it can deploy, and it can be isolated from supply lines to the mainland,” Batongbacal said.

That is one reason China would want to have as many bases as possible “to ensure maximum control and survivability” of its forces in the South China Sea.

Ayungin is in a “good location” as it is closer to the Palawan passage and overlooks the sea lines of communication there, Batongbacal pointed out. It is also “a stepping stone to Sabina Shoal, another one of their favoUrite anchorages,” he added.

But the Sierra Madre was stopping China from having full control of Ayungin.

“The fact that we are still there is evidence that they do not yet fully control the area. That’s why they want us to leave,” Batongbacal said. 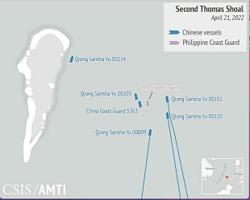