IPOH/BANGKOK, May 29 (Bernama): Home Minister Datuk Seri Hamzah Zainudin will be meeting his counterpart in Thailand to discuss issues on security at the border of the two countries soon.

He said among the matter to be given focus included the issue of terrorism following the incident of bombing and firearm shooting in Tak Bai, southern Thailand recently.

"We are investigating and seeking the necessary cooperation between Thailand and Malaysia to overcome the issue of terrorism which would be detrimental to both countries.

"So I will be meeting the Thai Home Minister to discuss on the listing of terrorists in the two countries,” he said.

He was speaking to reporters at the PAS Aidilfitri Open House which was also attended by its president Tan Sri Abdul Hadi Awang at Indera Mulia Stadium here on Saturday (May 28).

According to him there are no travel restrictions between the two countries for the people of Malaysia and Thailand but border control is being tightened presently.

"The issue of security is most important and the people should be careful especially Malaysians who are visiting Thailand,” he said.

The Home Ministry (KDN) had earlier confirmed no Malaysians were involved in the bombing and shooting incident in Tak Bai on Wednesday night.

Earlier the media quoting Bangkok Post reported three security forces personnel were injured after the marine police station in Tak Bai was attacked by individuals with firearms and grenades in the incident.

In the attack which began at 9.35 pm (local time), about six attackers hurled grenades at the station and opened fire with automatic rifles. - Bernama 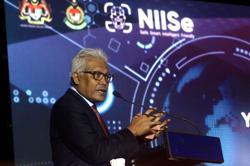