A visitor looks at photographs of Nabila, a young Bandanese woman, on display in Dutch photographer Isabelle Boon’s photography and multimedia exhibit, “I Love Banda”. - JP

JAKARTA (The Jakarta Post/Asia News Network): A photography and multimedia exhibition exploring historical and present-day Banda Islands in Maluku, which was at the centre of the 200-year spice wars among European colonial powers, offers a unique opportunity for poignant reflection and immersion.

The Banda Islands, a small group of islands in Central Maluku regency, have always been a magnet for visitors.

Today, tourists flock to the islands for their incredible natural beauty and cultural attractions. But in the 15th century, traders came from Europe to claim the islands’ “gold” of clove, nutmeg and mace, their greed finally leading to the islands’ invasion and occupation for centuries.

In 2015, Dutch photographer Isabelle Boon was on a project in the Kota Tua (Old Town) area of Jakarta when she learned of Banda’s tragic past. Intrigued, she decided to visit the island chain and talk to local youths.

Boon’s vivid pictures, audio recordings of her interviews and video footage of the islands’ cultural performances are now being displayed at Erasmus Huis Jakarta in the I Love Banda exhibition, after premiering at Amsterdam’s Scheepvaartmuseum (National Maritime Museum) in 2021.

“I had never heard of Banda before 2015,” Boon said during an interview at Erasmus Huis Jakarta on March 24, the opening night of her exhibition. It was a colleague that told her about the island chain and suggested she should visit them.

Curious, Boon then researched Banda and became shocked by what she discovered. The documents she studied revealed that in 1621, Dutch East Indies governor-general Jan Pieterszoon Coen tortured and killed thousands of Bandanese in his attempt to monopolise the islands’ spice trade.

“I thought, why didn’t I learn in school about what happened in Banda? About J.P. Coen and the Massacre of Banda?” she said.

Boon then decided to visit the islands herself the following year. “I wanted to know what happened in Banda and what’s life [like] for the people there,” she recalled.

I Love Banda, which runs at the Erasmus Huis Jakarta until June 17, features over 400 photographs showcasing the beauty of the island, as well as the daily lives of six Banda youths set against the backdrop of the islands’ colonial legacy.

“When you come to Banda, the first thing you see, you feel, is the Dutch presence,” Boon shared.

Banda has 12 fortresses as well as numerous grand mansions and churches built by the Dutch colonial government. Many are well-preserved and stand side-by-side with the islanders’ homes today.

Boon was taking pictures of these buildings in Banda Neira, the largest island in the chain, when a young girl approached and introduced herself in English as Ulfa Murad.

“We talked for hours,” Boon said. “She then invited me to her house in Kampung Spantjeby in Banda Besar.”

There, she met Ulfa’s parents and asked for their permission to interview and take pictures of her.

“I wanted to practise my English,” said 23-year-old Ulfa, who was invited to the exhibition opening in Jakarta.

“I also found out that [Boon] is a very nice, caring person, so I invited her to meet my family.”

Smitten by Banda, Boon kept returning to the islands until 2019. During her numerous visits, the photographer also got to know Karis, Mega Vani, Nabila, Nyellow and Ode, all aged 20-27 years today.

The youths told her about their daily life on the islands as well as their hopes and dreams, and allowed Boon to follow them around and take pictures.

“They want to be seen and make connections,” Boon said.

“As a Bandanese, I feel very proud to be invited to the exhibition opening in Jakarta and also to see pictures [of myself] in it,” said Vani, 20, a wide smile on her face.

“I never thought that the pictures would turn out so great.”

Vani first met Boon at a hotel in Banda Neira in 2019, when she stopped by to see an Australian friend that was visiting the island.

“Boon’s a very positive person. I’m happy to have met and shared my story with her,” she said Vani, who currently lives in Ambon, Maluku, where she is studying pharmacy at a state university.

In one of the pictures, Vani is seen hanging out with her schoolmates on the runway of Bandanaira Airport. As only two flights arrive each week, the airport runway is often empty and the islanders apparently love to hang out there.

A favourite display in the exhibition is the life-sized traditional canoe of Banda, called kora-kora, the wall behind it adorned with an oversized picture of children kayaking in the Banda Sea. Many visitors reportedly sat in the canoe and took selfies on opening night.

“[The canoe] was especially made for the exhibition to make it more interactive,” Boon explained.

Another important highlight is a facsimile of Hikayat (Chronicles), a handwritten manuscript by M. Saleh Neirabatij, which is currently on display in the Erasmus Huis library. The 1922 manuscript is written in a very neat hand in the Indonesian language, and records the islands’ origin myth as well the Dutch occupation.

“When we were working on the exhibition I Love Banda in 2021, we did some research in our collection [for] what objects could be related to the Banda Islands, and we found a very special document, a book which is very precisely written with colourful drawings of ships,” Scheepvaartmuseum representative Sanne Koch said at the exhibition opening.

“As far as we know, this Hikayat is the oldest oral history of the Banda Islands that has been written down,” Koch added.

At the center of the exhibition among Boon’s beautiful photos of the Banda Islands is a half-enclosed structure that houses a slideshow on loop that tells of the islands’ dark colonial past and the Banda Massacre of 1621.

“It’s a complex exhibition,” Dutch Ambassador to Indonesia Lambert Grijns said in his speech during the exhibition opening.

“For centuries, we built our own facts about Banda, because when I was in high school, I was taught that what we did in Banda, then the [Dutch] East Indies, was something to be proud of,” Grijns said.

Many visitors fell silent when watching the slideshow on opening day.

“Yes, we’re all aware of Banda’s bloody history. It’s a horrible thing that happened in the past. But we’re independent now. My parents have taught me to forgive and not to dwell on the past,” said Ulfa, who is currently studying English literature at Indraprasta University in South Jakarta. She aspires to return to her hometown and become a teacher, like her mother.

In a corner of the exhibition, a video shows Bandanese children playing one afternoon at Fort Nassau in Banda Neira. A few young men are also seen sitting on the thick walls of the fort, playing guitar and singing an Indonesian pop song.

“I think the present is much more important than the past,” said Boon.

“We all can learn from the past and move on.” 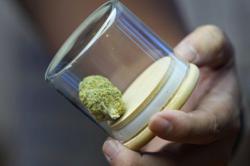