SINGAPORE (The Straits Times/Asia News Network): An Indonesian preacher has been denied entry into Singapore because he has a history of extremist teachings that are not acceptable here.

In response to queries, the Ministry of Home Affairs (MHA) on Tuesday (May 17) said Indonesian preacher Abdul Somad Batubara and six of his travel companions were denied entry into Singapore.

An MHA spokesman said the group of seven arrived at Singapore's Tanah Merah Ferry Terminal on Monday (May 16) from Batam.

She added: "Somad was interviewed, following which the group was denied entry into Singapore and placed on a ferry back to Batam on the same day.

"Somad has been known to preach extremist and segregationist teachings, which are unacceptable in Singapore's multiracial and multi-religious society."

She added that Somad, in the past, had preached that suicide bombings are legitimate in the context of the Israel-Palestine conflict, and are considered "martyrdom" operations.

He has also made comments denigrating members of other faiths, such as Christians, by describing the Christian crucifix as the dwelling place of an "infidel jinn (spirit/demon)".

A visitor's entry into Singapore is neither automatic nor a right, said the MHA spokesman.

"Each case is assessed on its own merits. While Somad had attempted to enter Singapore ostensibly for a social visit, the Singapore Government takes a serious view of any persons who advocate violence and/or espouse extremist and segregationist teachings," she said.

Somad on Monday put up a post about being denied entry into Singapore on social media. His post included a photo and video of his holding area in Tanah Merah Ferry Terminal.

Although he is one of Indonesia's most widely followed preachers on the Internet, Somad has been criticised by Indonesians, including mainstream Muslim leaders, for comments he has made denigrating other faiths.

After Singapore refused him entry, Indonesian media reports said he has been denied entry to Hong Kong, Timor Leste, and several European countries in the past.

Last week, Singapore said it had banned controversial Hindi-language movie The Kashmir Files on the grounds that it could cause enmity between different communities and disrupt religious harmony here.

The Infocomm Media Development Authority, which classifies films, said it had assessed the film in consultation with the Culture, Community and Youth, and Home Affairs ministries, and found it to be beyond its film classification guidelines.

The agencies said: "The film will be refused classification for its provocative and one-sided portrayal of Muslims and the depictions of Hindus being persecuted in the ongoing conflict in Kashmir.

"These representations have the potential to cause enmity between different communities, and disrupt social cohesion and religious harmony in our multiracial and multi-religious society." 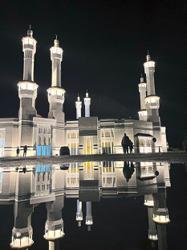