June 1 target to return to normal 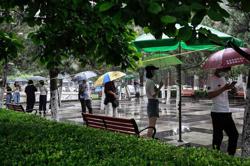 Push to be mobile again: A pile of bicycles from a bike-sharing service blocking a gate at a residential area during a Covid-19 lockdown in Shanghai. — Reuters

SHANGHAI has set out plans for the return of more normal life from June 1 and the end of a painful Covid-19 lockdown that has lasted more than six weeks.

In the clearest timetable yet, Deputy Mayor Zong Ming said yesterday that Shanghai’s reopening would be carried out in stages, with movement curbs largely to remain in place until May 21 to prevent a rebound in infections, before a gradual easing.

“From June 1, to mid- and late June, as long as risks of a rebound in infections are controlled, we will fully implement epidemic prevention and control, normalise management, and fully restore normal production and life in the city,” she said.

Beijing, which has been finding dozens of new cases almost every day since April 22, offers a strong indication of how difficult it is to tackle the highly transmissible Omicron variant.

The capital has not enforced a city-wide lockdown but has been tightening curbs to the point road traffic levels in Beijing slid last week to levels comparable to Shanghai’s, according to GPS data tracked by Chinese Internet giant Baidu.

On Sunday, Beijing extended guidance to work from home in four districts.

It had already banned dine-in services at restaurants and curtailed public transport, among other measures.

In Shanghai, the deputy mayor said the city would begin to re-open supermarkets, convenience stores and pharmacies from yesterday, but that many movement restrictions had to remain in place until at least May 21.

It not clear how many businesses have reopened.

From yesterday, China’s railway operator would gradually increase the number of trains arriving and departing from the city, Zong said.

Airlines will also increase its domestic flights. From May 22, bus and rail transit will also gradually resume operations, but people will have to show a negative Covid-19 test not older than 48 hours to take public transport.

Shanghai reported fewer than 1,000 new cases for May 15, all inside areas under the strictest controls. In relatively freer areas, the ones monitored to gauge progress in eradicating the outbreak, no new cases were found for a second day in a row.

A third day would usually mean “zero Covid-19” status has been achieved and restrictions can begin to ease. Fifteen of the city’s 16 districts had reached “zero Covid-19”. 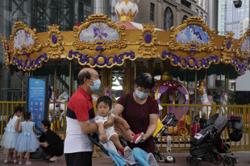