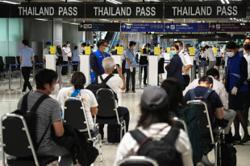 Travel industry players have welcomed the opening of the border with Thailand as a ‘new hope’ for Cambodia’s embattled tourism sector. - PPP

PHNOM PENH (The Phnom Penh Post/Asia News Network):Flow of trade, investment and tourism between Cambodia and Thailand is expected to gradually recover after Thailand reopened its land border on May 1, according to diplomats and industry experts.

Cambodian ambassador to Thailand Ouk Sorphorn hailed the reopening of the land border and expressed confidence that the move would boost the economies of the neighbouring countries.

“I do think that the reopening of the border will improve our bilateral trade, tourism exchange and investment,” he said.

Sophorn added that the move comes at fortuitous timing, just over half a year after Cambodia launched the new Law on Investment, which he said will boost investment and tourism between the two countries.

He added that several companies based in either country have already confirmed plans to bring Thai investors to visit and explore business opportunities in Cambodia.

Cambodia Association of Travel Agents (CATA) president Chhay Sivlin told The Post that the reopening of the Cambodia-Thailand border will encourage tourists from around the world to travel to both countries. Notably, it will become easier and more likely for international tourists to travel through or make a stop in Cambodia after visiting Thailand, which is home to some of the region’s international hubs.

She said that though Cambodia had opened to tourists long before Thailand, the flow of tourists has been limited by the lack of direct flights from more distant parts of the world.

“We do not have a lot of direct flights – they have to go through neighbouring countries. So it is good that Thailand has opened its borders, as it will promote tourists to travel around the region”, including Cambodia, she said.

“The opening of the borders of both countries will increase the number of international visitors and increase the flow of tourism traffic, providing income to the nation and a boost to our economy. This provides new hope for our tourism industry,” he said.

Sinan added that the rebounding of Cambodia’s tourism industry would continue to be reliant on regional neighbours reopening their borders, which would be key to fully restoring tourism to the South-East Asian region to pre-pandemic levels.

Although Cambodia-Thailand border checkpoints reopened on May 1, according to the Cambodian embassy in Bangkok, health measures are being strictly enforced.

The embassy said that travellers entering Thailand must present their Thailand Pass, national vaccination card, insurance policy with at least $10,000 in medical coverage and a negative Covid-19 PCR test result. 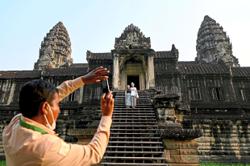