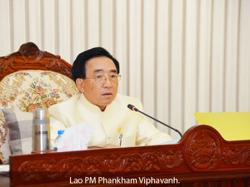 VIENTIANE, May 1: The Government of Laos has agreed to a minimum wage increase amid a rising cost of living and rampant inflation, reports Laotian Times.

The decision was reached among other items during a cabinet meeting held in late April in Vientiane Capital, chaired by Prime Minister Phankham Viphavanh.

Discussions on raising the minimum wage were held in March this year, with Vice President of the Lao Federation of Trade Unions, Phonesane Vilaymeng, saying the current minimum wage in Laos of LAK 1,100,000 (US$85) is just no longer viable.

He said that the cost of living has continued to increase, with high prices at markets directly affecting low-wage employees in the country.

This was met by pushback from the business sector, according to Vientiane Times, with the Lao National Chamber of Commerce and Industry (LNCCI) concerned that the burden on employers would be too high.

The Lao kip continues to depreciate, however, trading at LAK 12,384 to the US dollar last week, with the shadow rate already breaching LAK 14,000 to the dollar.

The minimum wage was last increased in mid-2018.