Beijing’s military build-up of three artificial islets in the South China Sea has raised concern on Taiwan over whether it should extend the runway of its Taiping Island to handle bigger warplanes.

But opposition lawmakers said Taiwan would be better off completing an expansion of the pier on Taiping to accommodate all kinds of vessels, including military frigates.

He said those efforts were increasingly aggressive moves that threatened all nations operating nearby.

What would happen if mainland China cut off Taiwan’s energy supplies?

In a report on Monday, the Taipei-based United Daily News quoted an unnamed source as saying the island’s security authorities had asked the military contract engineering company to complete upgrades on Taiping this year, including extending the existing 1,150-metre (3773 feet) airstrip by 350 metres.

According to the report, the extension would enable Taiping to accommodate F-16 jet fighters and P-3C anti-submarine aircraft, and if needed, the US could also use the runway.

Though the report was dismissed as speculation by Taiwan’s air force on Monday, lawmakers and analysts said the expansion of transport infrastructure on Taiping was essential.

“The extension of the runway would improve the capacity of the runway and greatly benefit our transport of supplies to Taiping,” said Wang Ting-yu, a legislator from the ruling Democratic Progressive Party.

Wang said the extension was proposed during Chen Shui-bian’s presidency in the 2000s, and that over the years new facilities such as navigation lights had been added to enable nighttime take-off and landing. The tarmac had also been expanded to fit two C-130 transport aircraft.

He said enabling fighter jets to use the runway would be a significant addition to the defence of Taiping.

“By extending the runaway, it also demonstrates our determination to defend ourselves and increase our transport capability,” he said.

But Charles Chen I-hsin, a legislator of the main opposition Kuomintang party, said the airstrip could already handle warplanes – the problem was that the jets could not carry enough fuel to use it.

“Currently, the runway is long enough to accommodate F-16s and other warplanes, but unless the warplanes are able to have aerial refuelling, they would not be able to fly back to Taiwan from Taiping,” he said.

Chen said it was more important to expand Taiping’s pier.

“True, the extension of the runway would facilitate our C-130 transport planes to carry more supplies, but what is more important at this time is to complete the expansion of the pier so that it can accommodate our new-generation 4,000-tonne frigates,” Chen said.

The island’s coastguard has ordered four of the frigates, taking delivery of the first one in April last year. The frigate can be converted into a warship to counter the growing threat from the PLA.

Chen, who first raised the question on the progress of the expansion project, including the runway, during a legislature meeting on April 13, said the new frigates would not only be able to carry more supplies than the transport planes, but could also be deployed as warships.

Military experts agreed that the runway extension could provide a safer environment for air operations and allow C-130s to carry more cargo.

“But it’s unlikely fighter jets and anti-submarine aircraft could be stationed there because there are no logistics and other supplies or refuelling for the warplanes. Basically, they could only fly over Taiping for no more than 15 minutes and then have to fly back to Taiwan,” said Chieh Chung, a senior researcher at National Policy Foundation, a KMT-affiliated think tank.

He said the extension of the runway would not offer any substantial help for the US military movements in that area either, given the lack of logistics and supplies for the US forces.

“So, it would be rather far-fetched to say the extension would help reinforce the US forces in the South China Sea,” he said.

Su Tzu-yun, a senior researcher at the Institute for National Defence and Security Research, said the extension would have logistical benefits but there were other compelling reasons for the upgrade.

“More important, the expansion is a reflection of the cooperation between Taiwan and the US to counter China’s military expansionism in the South China Sea,” he said, adding it would also provide more grounds for Taiwan to assert its territorial claims in the waters and aid rescue operations. 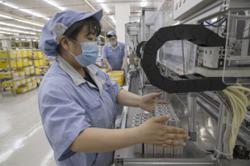