WITH the ongoing military operations of Russia on Ukraine dominating the news, even beauty pageant contenders in preparations for international competitions have found this hard to ignore.

For reigning Miss Eco Philippines Kathleen Paton and Miss Environment Philippines Michelle Arceo, the escalating unrest on the former Soviet territory is a cause for concern, even for those who are miles away from where the brewing war is taking place. 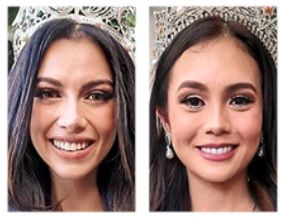 When a member of the pageant media asked in jest what her thoughts are on the matter, Paton gamely said, “I’m ready for that question!”

And she was not kidding. When the Inquirer quizzed her at the sidelines of their intimate meeting with the local media at Pandan Asian Cafe in Quezon City on Feb 24, Paton said, “I heard that Russia did make a move on Ukraine.”

She also lamented the brewing speculation of a World War III, but appealed to the people not to get too occupied with thoughts “about how disastrous that could be”.

The operatic singer continued: “I hope the world’s nations can come to terms with each other.”

The two also voiced their concern for those directly affected by military action.

“I can’t imagine what the people of Ukraine are feeling right now. I hope they’re safe. I hope the government there is doing the best they can,” Paton said.

Arceo, for her part, said, “I’m praying to God that we don’t lose any more lives.”

She argued that as beauty queens, they really cannot do much about the situation “except have our own opinions”.

But she is optimistic that beauty contestants can have a big enough voice through collective action, and “we can make a difference and talk to our governments”.

Paton, who was born in Aklan before moving to Australia, also related the Russia-Ukraine conflict to an incident in her hometown.

“In Aklan, something similar happened, but obviously not as extreme. One part of the island that Malay municipality thinks is theirs is actually in Nabas,” she shared.

Paton’s family owns a cold spring resort in Nabas that has also borne the brunt of the Covid-19 pandemic.

Arceo, meanwhile, touched on the environmental impact of Russia’s military operations, with her and Paton’s global pageants carrying a similar theme of protecting the planet. — Philippine Daily Inquirer/ANN