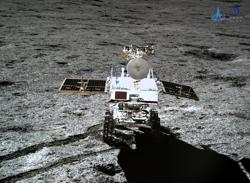 BEIJING: CHINESE scientists have found remnants of meteorites on the far side of the moon that might reveal a major source of water.

A group of researchers at the State Key Laboratory of Space Weather, which is operated by the Chinese Academy of Sciences’ National Space Science Center, said it had recently identified some “glassy materials” inside a 2m crater in the South Pole-Aitken Basin on the far side of the moon as remnants of a piece of carbonaceous chondrite that was not entirely vaporised when it struck the lunar surface.

Carbonaceous chondrites are meteorites originating in the asteroid belt near Jupiter and are believed to be among the oldest objects in the solar system.

Their existence on the moon may act as a source of water on the barren sphere, according to the research team, headed by Liu Yang.

Impactors are believed to be a major contributor of water and ice on the moon. Compared with other types of small celestial bodies, carbonaceous asteroids have a higher water content, meaning water carried by such asteroids is more likely to survive vaporisation and remain on the moon. — China Daily/ANN
Article type: metered
User Type: anonymous web
User Status:
Campaign ID: 46
Cxense type: free
User access status: 3
Join our Telegram channel to get our Evening Alerts and breaking news highlights