Most of China's Covid-19 drug development efforts have focused on antibody therapies that neutralise the virus. - AFP

BEIJING (Bloomberg): Where will newly developed Covid pills be needed the most? Rather than pandemic hot spots, it’ll be a place where the virus has yet to gain a sustained foothold: China.

That’s the take from Tong Youzhi, chief executive officer at Kintor Pharmaceutical Ltd., a Chinese company working on just such a product.

After successfully containing the virus with mass testing, surveillance and rigid border curbs, China is now uniquely vulnerable to the novel pathogen and needs access to effective treatments if outbreaks worsen.

"China is a virgin land for the virus, with so few people exposed,” Tong said in an interview with Bloomberg News.

"The urgency for effective Covid drugs is no less in China than elsewhere if we want to regain our pre-pandemic life.”

There is concern about Covid’s potential to wreck China’s patchy healthcare system once the country’s borders are open, Tong said.

The population has scant natural protection from prior infections, and its vaccines were less effective at preventing transmission of the virus in clinical trials.

Kintor’s experimental drug proxalutamide -- now being studied in late stage trials in the US and Brazil -- can be taken orally and is easily made in large quantities, valuable attributes in a pandemic.

Kintor, based in Suzhou, in east China’s Jiangsu province, began studying the compound years ago for treating prostate cancer. It inhibits a male hormone known as androgen, which some researchers believe could be tied to the risk of developing severe Covid.

An initial study in Brazil found it reduced hospitaliSations in those with mild Covid and deaths among the very sick, a result some experts said was too good to be true.

Larger and more rigorous trials are underway in the US, China and elsewhere to verify the findings, and positive results would pave the way for approval, Tong said.

Kintor’s shares have risen more than six-fold in the past 12 months, closing at HK$59.00 per share on Tuesday.

Most of China’s Covid drug development efforts have focused on antibody therapies that neutralise the virus. Emergency approval for the treatments in China is expected to come as soon as December, local media reported.

A homegrown treatment could be a crucial factor in China’s deliberations on when to pivot its strategy toward treating Covid as endemic.

In an interview with domestic media in late September, George Gao Fu, director of the Chinese Center for Disease Control and Prevention, said drugs are now the priority to mitigate the disease’s impact. Combined with vaccinations, being able to treat an infection will help the country transition to co-existing with the virus, he said.

Despite having more than 75% of its population fully vaccinated, China remains closed to the rest of the world and determined to stamp out any domestic flareups.

Its vaccination campaign relies heavily on homegrown inactivated inoculations that have been less effective at blocking infections than the highly potent mRNA shots widely used in the West. That raises questions about whether vaccination alone will be sufficient and is seen by analysts as a key reason for Beijing’s reluctance to shift away from the so-called Covid Zero strategy.

Uneven distribution of medical resources among the country’s 1.4 billion people also underscores the importance of access to effective drugs. While megacities like Beijing and Shanghai boast some of the world’s top doctors and most well-equipped medical facilities, the clinics and health-care networks in less developed parts of China are rudimentary and could be overwhelmed.

A recent flareup in the northwestern provinces that spread into a full-blown nationwide outbreak exposed risks for the country’s remote regions. Doctors and nurses were infected on the job, while many patients had to be transferred to larger facilities.

Effective and widely-available treatments could allay the fear of developing severe disease or dying, according to Kintor’s Tong.

"The challenge is tremendous,” Tong said.

"Given the high population density, the lack of infections and the lower per capita access, such a drug is all the more important for us to get back to normal.” 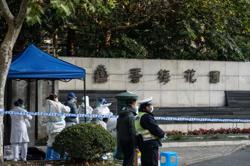