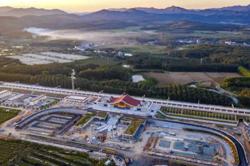 VIENTAINE, Oct 17 (Vientaine Times/ANN): The first passenger train to be put into service when the Laos-China railway comes into operation in December arrived at Vientiane station in Xaythany district on Saturday evening (Oct 17).

The electrical multiple unit train, which has been named Lane Xang, was handed over at a ceremony at the station on Saturday attended by Minister of Public Works and Transport Viengsavath Siphandone, the Chinese Ambassador to Laos, Jiang Zaidong, General Manager of the Laos-China Railway Company, Xiao Qianwen, and other officials.

Speaking at the ceremony, Viengsavath said the railway is a strategic cooperation project under China’s One Belt, One Road Initiative and the plan

“The government of Laos has scheduled the opening of the railway on National Day on December 2. The Laos-China Railway will be a symbol of friendship between Laos and China and will bring happiness and prosperity to the people of our two countries,” he said.

The railway is currently undergoing a thorough inspection process prior to acceptance, after which it will be put into service, signifying the fact that Laos is entering a new era of electric rail transport.

The Lao people will see a new era of transport transformation in the Lao PDR, Mr Viengsavath said.

The train will be a symbol for the Lao people in depicting a strong and prosperous country, and will improve the quality of people’s lives, he added.

Ambassador Jiang said that in the next phase of development, Laos and China will accelerate the construction of facilities alongside the railway to help develop the Laos-China Economic Corridor. This will foster conditions for economic recovery as well as generate closer cooperation between Laos and China.

The two countries will upgrade public services by delivering tangible benefits as well as other advantages. 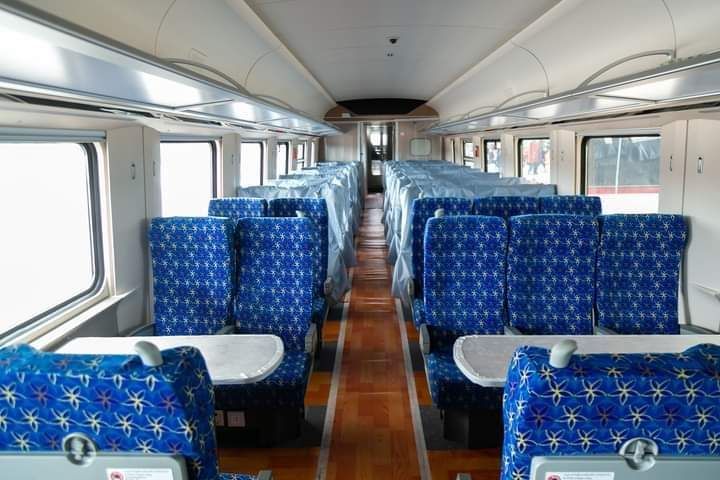 “Together, we have built this railway as a symbolic project of cooperation under the One Belt, One Road Initiative as well as Laos-China Friendship,” the ambassador said.

The train has been painted red, blue and white to reflect the colours of the Lao flag and can run at speeds of up to 160km per hour. It has seven carriages with two classes of seating, providing 720 seats in total.

A notice from the Prime Minister’s Office said the historic passenger train has been named Lane Xang as this was the name of Laos when it was known as the Lane Xang (million elephants) Kingdom.

Laos and China will inaugurate the railway, which links Vientiane with the Chinese border, on December 2 - the day when the Lao People’s Democratic Republic celebrates its 46th anniversary.

The second passenger train that the Laos-China Railway Company plans to buy will be named Khaenlao after the khaen, which is a traditional pipe instrument whose music has been inscribed as an Intangible Cultural Heritage of Humanity by the United Nations Educational, Scientific and Cultural Organisation (UNESCO).

It is expected that the railway will cut the cost of transport through Laos by 30-40 per cent compared to travel by road, thus giving a boost to trade and investment.

The 422.4km railway runs from Vientiane to the Chinese border through the provinces of Vientiane, Luang Prabang, Oudomxay and Luang Namtha, passing through 75 tunnels with a combined length of 197.83km.

There are 10 passenger stations in Vientiane, Phonhong, Vangvieng, Kasy, Luang Prabang, Nga, Xay, Namor, Nateuy and Boten. There are also 22 stations for the loading and unloading of freight. - Vientiane Times/ANN