VIENTIANE, Oct 15 (Vientiane Times/ANN): The symbol of the Lao flag with its three colours has inspired the design of the first train that will run on the Laos-China Railway.

The EMU train, called “Lane Xang” after Laos’ former name from the time when the country was known as the Lane Xang (million elephants) Kingdom, is set to arrive in Vientiane on Friday, ahead of the planned opening of the railway line in December.

The Laos-China Railway Company said the symbol of the Lao flag had inspired the experts when they designed the train.

This will make people easily recognise that the design of the train’s outer part was inspired by the symbol in the flag and its three colours – red, white and blue.

Red represents the blood of the Lao revolutionary fighters, blue the rich natural resources of the country, and white the solidarity of the people under the leadership of the Lao People’s Revolutionary Party.

The train consists of seven carriages with two sitting clases providing combined 720 seats. The first class has 56 seats, and the second class consists of 662 seats and two special seats for disabled passengers.

Laos and China have agreed to inaugurate the railway line, which links Vientiane with the Chinese border, on December 2 – the day when the Lao People’s Democratic Republic celebrates its 46th anniversary.

The Lane Xang train will be used on the inaugural day and operated later on.

The Laos-China Railway Company plans to purchase another train to bolster its operations and services.

The second train is named “Khaenlao” after the khaen, a traditional pipe instrument whose music was recognised as an Intangible Cultural Heritage of Humanity by the United Nations Educational, Scientific and Cultural Organisation (UNESCO).

The Lao government confirmed last week that the Laos-China Railway will open on December 2 despite the escalating Covid-19 outbreak.

Authorities are drawing up plans for the opening and operation of the railway under conditions that comply with Coronavirus control measures, to ensure the safety of everyone concerned.

Once it is operational, the rail service will facilitate and speed up travel from Vientiane to northern Laos, which is currently done by roads running through mountainous terrain.

It is expected that the railway line will cut the cost of transportation through the northwestern Laos by 30 per cent to 40 per cent, when compared to transportation by road. - Vientiane Times/ANN 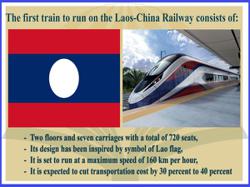