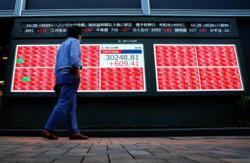 HONG KONG (AFP): Asian markets rose Thursday (July 29) as the Federal Reserve acknowledged the US recovery was well on track but it would not taper monetary policy just yet, while Hong Kong was lifted after China sought to reassure investors over its latest regulatory crackdown.

Traders were also cheered by progress in Washington on President Joe Biden's trillion-dollar infrastructure bill, which he has said could "transform America" and add to the monumental amounts of stimulus already pumped into the world's top economy.

The developments overshadowed concerns about the spread of the Delta coronavirus variant that is sending infection rates spiking in several countries -- including those with high vaccination rates -- and forcing some governments to impose lockdowns or other containment measures.

After a closely watched meeting, the Fed said the pandemic recovery was progressing well but it was still too early to take away the ultra-loose policies that have helped nurse the economy back to health.

The central bank has said it will maintain its massive bond-buying and record low interest rate scheme for as long as it takes to tame unemployment and keep inflation running hot for an extended period.

It said the worst-hit sectors "have shown improvement but have not fully recovered" and cautioned that "risks to the economic outlook remain".

Referring to a time when the Fed can begin tapering, boss Jerome Powell told reporters: "We're not there. And we see ourselves as having some ground to cover to get there."

However, he said policymakers had taken a "first deep dive" on how to begin winding the bond-buying down but no decision had been made.

Observers said that with no meeting set for August, the bank was unlikely to move until the back end of the year.

"What is noteworthy is that the Fed considers that the US economy 'has made progress' towards its goals -- a strong hint it could start to taper its asset purchases as soon as December."

And Bank of Singapore's Mansoor Mohi-uddin agreed, adding: "This slow exit is thus likely to keep benefiting risk assets during 2021."

Meanwhile, traders are keeping tabs on developments in Washington after the Senate passed Biden's infrastructure package after weeks of negotiations.

The bipartisan bill passed with 17 Republicans joining all 50 Democrats to formally begin a debate.

While the Fed news was met with a shrug on Wall Street, Asia enjoyed gains in early trade, having endured a volatile week so far.

Hong Kong led the way, however, piling on more than two per cent, extending Wednesday's 1.5 percent rally, while Shanghai climbed almost one per cent.

The advances in Hong Kong came after Chinese authorities tried to soothe fears that their recent crackdown on the private education, tech and property sectors was not a drive against money-making companies.

The securities regulator held a hastily convened meeting with top investment bank heads Wednesday night, which left some feeling that the education measures -- banning tuition firms from making profits or raising capital -- were targeted and not intended to hurt companies in other industries, Bloomberg News reported.

The move came after state-run media looked to temper fears across trading floors, saying the rout had gone too far and that economic fundamentals remained strong.

Private tuition firms that have been strafed this week enjoyed healthy gains, while tech giant Tencent -- which has been targeted over its vast exclusive music rights -- was also up.

However, the companies' gains were nowhere near clawing back their recent losses.

National Australia Bank's Ray Attrill said in a note: "How successful the messaging by the authorities will be in putting a floor under the broader Chinese stock market remains to be seen." 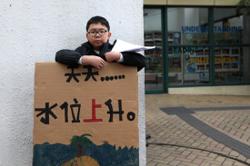