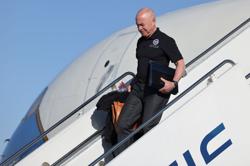 WASHINGTON, July 24 (Bernama): Citizens from Myanmar, Somalia, Syria, Venezuela and Yemen can now apply for Temporary Protected Status (TPS) in the United States, provided they are applying for the first time, US Citizenship and Immigration Services (USCIS) has announced.

"USCIS is starting with these countries because they are either new designations or recently announced re-designations.

TPS allows citizens of nations impacted by natural disasters, war, political turmoil and other calamities to live and work in the United States until it is safe to return to their former homes.

Myanmar has been in turmoil since a February coup that ousted Aung San Suu Kyi's government, with close to 1,000 people killed in a junta crackdown on dissent, according to a local monitoring group.

An estimated 230,000 people also have been displaced by fighting in Myanmar and need assistance, the United Nations has announced, as a major armed ethnic group expressed concern about military force, civilian deaths and a widening of the conflict.

It has been crisis after crisis since the Feb 1 coup ousted an elected government, prompting nationwide anger that has led to protests, killings and bombings, and battles on several fronts between troops and newly formed civilian armies.

The United Nations Office for the Coordination of Humanitarian Affairs (OCHA), said relief operations were ongoing but were being hindered by armed clashes, violence and insecurity in the country.

Since the military seized power on Feb. 1 and arrested Suu Kyi and other senior members of her party, hundreds of people have been killed as the army quelled street protests and in clashes between soldiers and newly formed people's militias. - Bernama