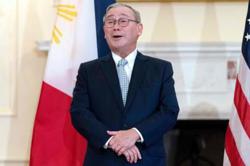 In this March 7, 2021, handout photo provided by the Philippine Coast Guard/National Task Force-West Philippine Sea, some of the 220 Chinese vessels are seen moored at Whitsun Reef, South China Sea. - AP

MANILA (Philippine Daily Inquirer/ANN): The use by hundreds of Chinese vessels of the Philippines’ exclusive economic zone (EEZ) as a massive toilet for human excreta and other raw wastes was just one of the destructive impacts of China’s territorial grab in the area.

Years before satellite images showed what analysts said was human poop being disgorged by China vessels that are stationary in West Philippine Sea, scientists had already calculated the ecological and economic damage being attributed to the Chinese intrusion and the numbers are mind boggling.

On July 12, US-based tech firm Simularity said China’s dumping in West Philippine Sea, which is inside Philippine EEZ, of raw sewage, including human faeces, was destroying coral reefs and creating a “dead zone” where fish could no longer breed.

“Coral reefs are basically habitats for a vast number of species, and it’s where most fish species go to breed and spawn,” said Liz Derr, co-founder and CEO of Simularity.

“And if the reef habitat is damaged, the fish won’t go there to spawn anymore,” she said.

Derr’s assessment came years after other scientists found signs of marine life dying in the area as a result of China’s occupation of reefs inside the Philippines’ EEZ and the reefs’ conversion into Chinese military bases.

A 2019 study by three research scientists, including Leland Smith of the Georgetown University Law Center, said “the extent of the damage caused by island-creation is believed to be large” as reefs “support the largest concentration of marine biodiversity on Earth.”

The researchers emphasised that West Philippine Sea “sits on the western edge of the Coral Triangle, which hosts the largest concentration of marine biodiversity on Earth including many threatened species.”

The study, “Evidence of Environmental Changes Caused by Chinese Island-Building”, looked into the environmental effects of island-building by China in the sea, which “result from dredging and can negatively impact” marine life.

“With China’s illegal encroachment, fishes and other marine species are bound to lose their habitats as reclamation and the building of military bases has destroyed at least 16,000 hectares of reefs as of 2017,” Agham said.

In April 2021, Agham said that the Philippines is losing an estimated P1.3 trillion a year as a result of coral reef damage caused by China’s intrusion and construction in West Philippine Sea.

Agham said the estimate was reached by multiplying the number or reefs destroyed with their economic value, which is more than P17 million per hectare of reef per year.

Stretching west from Mindoro and Palawan toward Panatag or Scarborough Shoal and the Kalayaan Island Group (KIG) or Spratly Islands, West Philippine Sea covers the western maritime area of the Philippines.

The Department of Environment and Natural Resources–Biodiversity Management Bureau (DENR–BMB) said KIG has 30 per cent of the Philippines’ total reef area.

According to 2018 data from the Bureau of Fisheries and Aquatic Resources (BFAR), the Philippines has at least 27,000 square kilometers of coral reefs.

Coral reefs, the National Ocean Service said, are part of the “most diverse and valuable ecosystems on Earth that supports more species per unit area than any other marine environment.”

Because of the West Philippine Sea’s expansive coral reefs, the DENR–BMB said the area has about 500 species of coral reefs that are home to 1.94 million metric tonnes of large tuna, purple back squid, bonitos and trevallies.

With 62,000 to 91,000 metric tonnes of fish harvested yearly, West Philippine Sea has enough resources to feed 1.6 to 2.3 million Filipinos per year.

Until the Chinese came with their dredging machines.

West Philippine Sea’s biological health was not just threatened. It was under intense assault.

Dredging, which is the removal of sediments and debris from the bottom of the sea, resulted in environmental alterations which later had a massive impact on marine life.

“The potential causality between Chinese island-building operations and environmental degradation is potentially significant, as the Spratly Islands in the South China Sea form a distinct marine ecosystem, which serves as a significant source of larvae for regional coral reefs,” said the study.

In 2015, fishermen in Zambales retrieved from the sea a total of 34 dredging assemblies which bore Chinese markings. Each assembly consisted of a 12-metre long, 1-metre diameter iron pipe with three plastic-encapsulated foam floaters and flexible rubber connectors.

Signs of dredging’s impact, Agham said, were seen as it investigated the construction by China of a military facility on Panganiban (Mischief) Reef where dredging destroyed a wide area of fish habitat—nearly 560ha of land reclaimed and a 2,644-metre long, 55-metre wide runway built on top of it.

Through the use of satellite imagery, researchers noted an increase in the scatter, or displacement, of water by 350 per cent in areas around the reef.

Plumes of excess sediment being blown by winds covered a 250sq km area at times during the island construction. The total area dredged was 1,200sq km, about 42 times the size of Makati City.

“Dredging activities led to a decrease in biological health of the region resulting from the smothering of natural benthic habitats and reef complexes with sediment,” the researchers said.

Simularity’s February 2021 report pointed out that despite the Covid-19 pandemic in late 2020, significant changes in seven areas of Mischief Reef were reported which indicated that there was no pause in China’s destruction of reefs to build islands on them.

Agham said that China’s destruction of reefs in West Philippine Sea will also lead to a loss in livelihood of at least 627,000 Filipino fisherfolk.

Multiplied by at least four dependents per fisherman, that would be more than 2 million Filipinos at risk of losing their source of food.

Opposition Sen. Risa Hontiveros, in 2020, said China owes the Philippine government at least P200 billion in environmental damages for the “annual losses of the country due to damaged reef ecosystems.”

There was no sign, however, of the Duterte administration taking China to task for the massive ecological damage.

In statements made weeks apart, both China and Philippine President Rodrigo Duterte belittled the Philippines’ victory in the Permanent Court of Arbitration in The Hague against China’s fictional nine-dash line claim in South China Sea, including waters inside the Philippines’ EEZ.