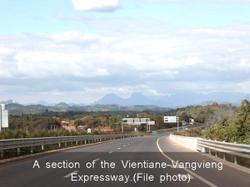 VIENTIANE (Vientiane Times/ANN): It is estimated that it will take 10 years to build the next three sections of the Laos-China expressway from Vangvieng district in Vientiane province to the Chinese border in Luang Namtha province, at a cost of US$6 billion.

Surveying of the next three sections of the Laos-China expressway, which will run between Vientiane and Boten at the Chinese border in Luang Namtha province, is now complete.

The expressway will cover a total distance of 440km and comprises four sections. The first stage between Vientiane and Vangvieng district in Vientiane province has already been built and is in use.

Section 2 will run between Vangvieng and Luang Prabang province, section 3 will link Luang Prabang and Oudomxay provinces, and section 4 will extend between Oudomxay and the Chinese border.

Deputy Director of the Laos-China Joint Expressway Development Co., Ltd., Tao Jun, said surveys of sections 2, 3 and 4 have been completed.

A Memorandum of Understanding has been signed on funding for construction and an assessment of the effects of the Covid-19 pandemic on the import of construction equipment has been carried out.

It will take 10 years to build the next three sections, according to China Radio International.

A project official told Vientiane Times on Wednesday (June 23) that section 2 will cost about US$3.2 billion, section 3 will cost US$2.89 billion, and section 4 will cost US$1.6 billion to build.

The government has approved the route for section 2 of the expressway, which runs between Vangvieng and Luang Prabang province.

Construction of the Vientiane-Vangvieng section began at the end of 2018 and was set for completion in 2021 but was finished ahead of schedule in December 2020.

The Chinese investor will operate the expressway under a 50-year concession agreement, with the total cost expected to be US$1.2 billion. The Lao government has a 5 percent stake in the project.

The Vientiane-Vangvieng link is the first section of the expressway, with the investing company from Yunnan province intending to build three more sections that will eventually link Vientiane to Boten on the Laos-China border.

The project agreement was signed in 2017 during Chinese President Xi Jinping’s state visit to Laos. The expressway is a cooperation project under China’s One Belt, One Road Initiative and is symbolic of the friendship between Laos and China.

The government is working to improve the transport of goods and people, promote the production of goods, and boost commerce, investment, tourism and services.

Motorists will benefit through the much shorter travel times that will be possible when the expressway is complete. - Vientiane TImes/Asia News Network 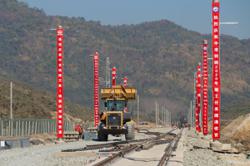