Such epic undertaking took place six days after the Shenzhou-12 crew entered their new home in space on June 17.

At the beginning of the call, which was livestreamed by national broadcaster China Central Television (CCTV), taikonauts Liu Boming and Tang Hongbo were seen making adjustment to a spacesuit which is expected to be used for future extravehicular activities.

Nie Haisheng, the crew leader, was operating the space station system at the working station in the main compartment.

After all the three men gathered at the space station core module’s main compartment, in front of a Chinese national flag and a CPC flag, they saluted President Xi.

Xi sent warm greetings to them and wished them a successful mission.

Nie said the crew is proud of the great Party and the country. “Us Chinese taikonauts now have a long-term home in orbit, ” the crew said.

The call went smoothly without any delay or interruption. - Global Times 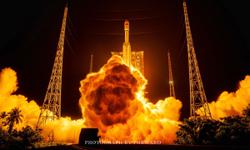