Paying more for a bigger house to fit work needs, the new norm? 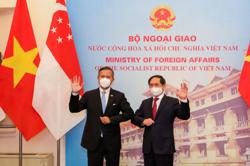 Canadian national Sayjel Patel and wife Joy have had to radically reassess their property needs in the wake of the work from home trend that has rapidly taken hold.

The couple used to rent a one-bedder in Eunos for S$2,000 (RM6,195) a month when Patel was a researcher at the Singapore University of Technology and Design before relocating to Dubai in 2018.

But when his Singapore-based software start-up Digital Blue Foam started to grow and he decided to move back here, the 34-year-old chief technology officer, who now has a 17-month old baby, felt he needed a much bigger space for his growing family and to accommodate work from home.

“Rental costs have gone up everywhere in Singapore. Dubai had an oversupply of housing units, so we could get a good deal there. But Singapore is the opposite, ” he said.

“Because of the pandemic, we realised the value of working from home.

“When we were in Dubai, we lived in a two-bedroom house with no study, ” he noted.

“I had to work at the kitchen table. It was very stressful for my wife, who is a homemaker.

“But in Singapore, we now have a study, ” Patel said.

Digital Blue Foam, which is a five-minute walk from his River Valley home, develops software for architecture and real estate firms around the world.

“We use AI to propose more sustainable building designs through our Web-based software.

“Our main customers are in Japan and Korea, but we have plans to expand in Singapore, ” Patel said.

However, returning to Singapore took longer than they expected as the Patels’ entry approval was delayed due to more stringent border controls.

“That delayed our decision on renting.

“We had hoped to get into Singapore in February this year. But we arrived only on April 19, and then had a three-week quarantine, ” he said.

But the delay proved a blessing in disguise as the container ship carrying his family’s belongings from Dubai was among those that arrived in Singapore late because of the jam caused by the grounding of the megaship Ever Given in the Suez Canal in March.

“Just about everything that could be delayed was delayed, ” Patel said.

Still it turned out well because the Patels managed to book their apartment before their belongings arrived on May 14.

“Our stuff was supposed to have arrived on April 27. But we’ve been very fortunate, and we have great friends here in Singapore helping us, ” he said. — The Straits Times/ANN