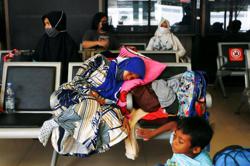 Sea of humanity: Indonesians making their way out of Banding to their hometowns to celebrate Aidilfitri. — AFP

STREET food vendor Ahmad Dedi and his family arrived at Jakarta’s Pasar Senen train station from the neighbouring city of Bekasi more than six hours before their departure to Kebumen, Central Java, on Tuesday evening.

They had left early to avoid traffic jams, not wanting to miss the trip home for Hari Raya Aidilfitri after being unable to do so last year because of the pandemic.

While the family used to travel home by motorbike, Ahmad, his wife and their three children, including their nine-month-old baby, decided to take the train this time, just before a ban on the exodus for Hari Raya took effect on Thursday. Major inter-city roads will be closed with the ban.

He said: “We were sad not to unite with our parents last year. Now, despite the pandemic, we’re trying to gather with our families.”

Each year, as the end of Ramadan approaches, millions living in Jakarta and other parts of the archipelago make their way home by air, sea and land in a massive exodus known as mudik.

Festivities in the world’s most populous Muslim-majority country, where over 90% of its 270 million people practise the faith, are normally marked by home-cooked feasts and visits to the homes of neighbours, friends and relatives.

But the government has called for modest celebrations again this year to curb the spread of Covid-19, which has killed more than 46,000 and infected 1.7 million people in the country.

It has also banned mudik until May 17, suspending ticket sales for long journeys on various modes of transport and closing major roads.

In an address to the nation on April 16, President Joko Widodo reminded Indonesians that restrictions were necessary to stem the spread of Covid-19 infections, which had surged during long holidays last year. — The Straits Times/ANN 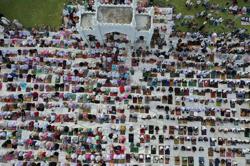