MANILA, May 6 (Xinhua): Around 3.44 million Filipinos were out of work in March, down from the 4.2 million in February as the country reopens further the economy, the Philippines Statistics Authority (PSA) said on Thursday.

Mapa said the number of unemployed Filipinos aged 15 years and over in March was estimated at 3.44 million, a reduction of about 747,000 unemployed persons from February.

"This is the lowest reported rate covering of the COVID-19 pandemic since April 2020 (at the height of the lockdown period)," Mapa said in an online briefing, expressing hope that the downward trend will continue.

Mapa said the employment rate rose to 92.9 percent in March, from 91.2 percent in February.

Mapa said that the underemployment rate in the country also decreased from 18.2 percent in February to 16.2 percent in March.

Indeed, the country's labour market continued to see gains in March as the economy reopens. Rising labour force participation and falling unemployment have enabled millions of Filipinos to regain their jobs and incomes in March.

Socioeconomic Planning Secretary Karl Kendrick Chua said that the government expects "to see a temporary reversal of these employment gains" due to the imposition of strict lockdown measures in Metro Manila and its four adjacent provinces from March 29 to May 15.

"However, the impact is expected to be less severe compared to April 2020 given our more risk-managed approach to the present quarantines," Chua said.

The Philippines has been in varying lockdown levels since the government imposed a lockdown in mid-March last year, causing many businesses to close down temporarily. 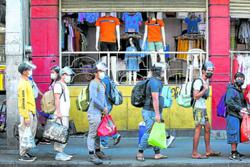