Vietnam orders companies to comply with its laws on sea maps HANOI, April 10 (Bloomberg): Companies operating in Vietnam must comply with laws that forbid content that contradicts the nation’s sovereignty over the Spratly and Paracel islands in the South China Sea, Ministry of Foreign Affairs spokesperson Le Thi Thu Hang said at a Hanoi briefing.

Hang responded to questions about the use of maps on the websites of companies such as Hennes & Mauritz AB that claim more than 80% of the sea as Chinese territory.

"Companies operating in Vietnam must respect and strictly comply with the laws of Vietnam, ” she said.

"Any form of communication and promotion of content that go against history and international law are invalid and cannot change the fact that Vietnam enjoys sovereignty over the Paracel and Spratly islands.”

Meanwhile, Vietnam News reported that in response to a question over Vietnam's foreign relations under its new leadership, especially with China and the US, the foreign spokesperson said that policies were clearly identified in the documents adopted at the 13th National Party Congress held earlier this year.

Vietnam will be consistent with its foreign policy of independence, sovereignty, diversification and multilateralisation, Hang said.

“We will further strengthen relations with our partners, especially important partners, with added depth, efficiency and sustainability, and increased intertwined interests, ” she continued.

The entire political system of Vietnam, including the Vietnamese Government, will be carrying out foreign policy in this direction, Hang stressed. 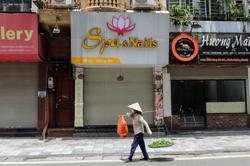