VIENTIANE (Vientiane Times/ANN): The new President of the Lao PDR, Thongloun Sisoulith, has vowed to create an environment that will enable Laos to enjoy stability and nationwide security as well as sustained socio-economic development in the coming years.

Thongloun who also serves as the Secretary General of the Lao People's Revolutionary Party, made the pledge after the inaugural session of the 9th Legislature of the National Assembly on Monday elected him as head of state, replacing President Bounnhang Vorachit who retired from the position of Party chief during the Party Congress in January.

“I will work alongside other Party and state leaders to do whatever we can to create conditions that secure national stability, security and sustained socio-economic development, ” he said after assuming the position of state president during the National Assembly meeting.

Party and state authorities will continue their mission to improve livelihoods and cement the foundations of the people’s democratic regime, he added.

President Thongloun also promised that the state administration would continue to strengthen and deepen change in line with the opening-up policy initiated in 1986.

The new administration will also pursue a foreign policy of peace, independence, friendship and cooperation for sustained development in the region as well as the world, he said.

As part of efforts to maintain good governance, Thongloun said that, as the country’s top leader, he would respect and implement the constitution and laws as well as be loyal to the nation and its citizens.

During his speech to accept the presidency, he thanked and congratulated his predecessor, Bounnhang Vorachit, who served as an important national leader as well as a leadership strategist.

He praised Bounnhang as being a strong and brave leader who had dedicated his physical and intellectual strength to the national struggle for independence as well as national protection and development.

During the NA session on Monday, Thoungloun recommended that the National Assembly elect Phankham Viphavanh as the new prime minister, to fill the vacancy left by his departure.

After assuming the post of the head of government, Phankham said his government would continue to maintain political stability and security as well as address undesirable trends taking place in Laos.

As the prime minister, Phankham will build the government’s leadership and capacity to maintain a strong macroeconomy including public finance reform in order to bring quality economic growth and sustainability.

The new prime minister also promised to improve state administration in order to serve people more efficiently and quickly and ensure that public administration was in line with the law.

Phankham said his focus would be on building the foundations for Laos to achieve the UN’s Sustainable Development Goals, reduce poverty and narrow the development gap between urban and rural areas.

In relation to foreign affairs, he said the government would pursue a foreign policy of peace, independence, friendship as well as promote wider and deeper cooperation with strategic and friendly nations. - Vientiane Times/Asia News Network 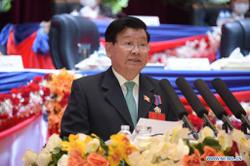