US and China must manage tensions, work on common challenges: Singapore DPM

The US and China will continue to be strategic competitors, said Deputy Prime Minister Heng Swee Keat. - Reuters

SINGAPORE (The Straits Times/ANN): Even as the United States and China compete strategically, the two major powers must find a way to manage tensions and develop a framework for cooperation, said Deputy Prime Minister Heng Swee Keat.

Speaking at the Credit Suisse Asian Investment Conference on the topic "Will Asia emerge stronger in a post-Covid-19 world?" on Monday (March 22), Heng said a stable US-China relationship is important to the global commons.

While the Biden administration will bring a more predictable approach to the world's most critical bilateral relationship, the US and China will continue to be strategic competitors, he said.

"I am glad that both sides have acknowledged that there are areas that they could work together on, despite the competitive tenor of their relationship."

He called the first high-level, face-to-face meeting between both countries under the Biden presidency last week "a step in the right direction".

At the start of what Washington called "tough and direct" talks in Alaska last Thursday and Friday, top Chinese and US diplomats publicly rebuked each other's policies.

China's official Xinhua news agency later said that both sides will set up a joint working group on climate change.

Heng said it is in the interest of both sides to cooperate on common challenges such as Covid-19 and climate change.

"The meeting showed a recognition from both sides on the need for dialogue. It is important that they persevere -- maintain open channels of communication, find a way forward to deal with their differences, and manage the tensions and frictions."

While tensions could intensify for some time, he hoped that a framework for cooperation will be developed even as both sides continue to compete.

"Fair, healthy competition can be positive, if it spurs innovation to achieve better solutions for the many complex challenges that the world faces," he said.

He also said it is critical that both countries remain constructively engaged with the region. The US' presence has provided much needed stability since World War II, and its investments have been instrumental to the region's rapid growth.

Welcoming the Biden administration's commitment to continue to engage and strengthen its partnership with the region, Heng said Asean is an important partner for the US, not just in terms of tackling existing and emerging global challenges, but also in putting regional engagement efforts into concrete action.

At the same time, China's economic success has been a boon for growth in the region, he said, noting that the Asean-China Dialogue Partnership, which commemorates its 30th anniversary this year, is one of Asean's most substantive external partnerships.

"The constructive involvement of both the US and China in the region will be key to Asia's continued peace, stability and growth."

Heng added that South-east Asia must continue to work with all parties, not just the US and China.

Describing the principle of Asean centrality, he said the region must work as one Asean to advance its collective interest. This is not a question of choosing sides, but of retaining the ability to make choices for itself.

"Should US-China tensions escalate, our region must firmly remain anchored on Asean's own interest, and to keep ourselves open and relevant through practical steps," he said.

"This will enable us to emerge stronger from this crisis."

He noted that other than the US and China, the leaders of the Quad -- US, Japan, India and Australia -- also recently reaffirmed their strong support for Asean centrality.

The Quad -- short for Quadrilateral Security Dialogue -- is an informal strategic dialogue between the four countries.

In a joint statement released earlier this month, the group stressed its "strong support for Asean's unity and centrality".

Heng said that while Asia faces promising prospects due to its young population and fast-growing middle class, its growth is "not fore-ordained".

Its demographic dividend could turn into a lost generation if countries are not able to equip their young with the right skills and create enough good jobs to ride the structural shifts, he said.

Countries such as Japan, China, South Korea and Singapore are also ageing rapidly, which will affect economic growth and increase social needs.

"Without adequate and sustained investments, the region's economy will not achieve its full potential, and could remain susceptible to future pandemics and catastrophes."

He said it is important for the region to not only navigate the shifting geopolitical tides, but also ride the next wave of economic opportunities together.

This means deepening regional integration and cooperation by speeding up the ratification of trade pacts such as the Regional Comprehensive Economic Partnership and growing the cross-border digital economy, stepping up economic transformation, and remaining open to investments from around the world.

"The economies of South-east Asia must seek to draw in more investments, as companies reconfigure their production bases and supply chains for greater resilience," he said.

"Given the huge need for investment capital in the region and the expertise investors bring, it is neither possible nor prudent to rely only on one source of investment. We must therefore continue to welcome countries and companies from around the world to grow their presence here."

Singapore, he added, can be a partner in the region by serving as a gateway for investments, a launchpad for innovation, and a green node for sustainability.

The Republic has a strong rule of law, international connectivity and a workforce which understands regional culture and norms, he said.

As a trusted global financial centre with prudent and progressive regulation, Singapore can play a useful role in bringing in global investments.

The venture capital sector is also growing, with many global companies setting up research and development facilities here.

"To expand our capacity for innovation, we are investing US$19 billion (S$25.5 billion) over the next five years in research, innovation and enterprise, across key domains such as advanced manufacturing, healthcare, urban solutions and the digital economy," he said.

Singapore can also be a marketplace for high-quality carbon credits and promote sustainability through green finance, said Heng.

He pointed that today, the Republic accounts for over one-third of the sustainability-linked loan market in the Asia Pacific.

The Government will take the lead by issuing green bonds on select public infrastructure projects.

In his Budget statement on Feb 16, Heng said $19 billion of public sector green projects have been identified as a start.

He stressed that as the pandemic accelerates disruptions, it is important that countries plan ahead, invest in new capabilities and innovate so as to emerge stronger.

"There are many opportunities in Asia, especially South-east Asia. To continue to thrive, we must remain an open and inclusive destination for investments around the world." 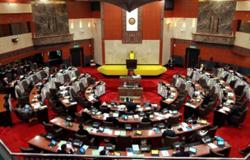