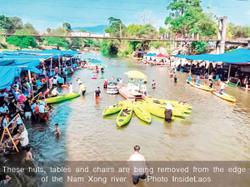 VIENTIANE, March 20 (Vietiane Times/ANN): Business owners in Vangvieng district, Vientiane province, are removing huts, tables and chairs along the Nam Xong river after being ordered to do so by local authorities.

Vangvieng district Governor Bounchan Malavong told Vientiane Times that bars and restaurants that line the river’s edge were being dismantled in an attempt to keep the area clean.

In recent months, numerous eateries have sprung up on the riverbank, attracting large numbers of visitors who generate a great deal of garbage which ends up in the river.

With many of the restaurants extending into the river itself, their presence obstructs the use of the river by kayakers, Bounchan said.

Restaurant owners who fail to comply with the order will be fined 10 million kip, according to Vangvieng district authorities.

The riverside restaurants have become increasingly popular with visitors to Vangvieng, who congregate there in large numbers. But lax control has seen these eateries proliferate and many now extend over the water’s edge.

Authorities say that while tables and chairs must not be placed directly on the riverbank, they may be set out further away from the river within the specified limit.

In addition, billboards in the area must be removed within 15 days. Work to remove or relocate restaurants and billboards began on Monday, Bounchan said.

The authorities will also carry out checks at restaurants, especially those at tourist attractions, to investigate the price of the food on offer, after many people complained about high prices.

Last year, more than 80,000 people from Laos and other countries visited Vangvieng district.

This number represented a drop of about 35 per cent compared to 2019, with the fall attributed to travel restrictions due to the Covid-19 outbreak, according to a district official.

Vangvieng is within easy reach of Vientiane city and travel time is now about 90 minutes on the Vientiane-Vangvieng expressway.

The tourist hotspot offers a wide range of activities.

There are monthly festivals, stunning landscapes, and lots of exciting adventure opportunities. Water features significantly in the area’s attractions, with the placid Nam Xong river a central part of the highlights and offering visitors the chance to kayak, float downstream in an inner tube, jump from rope swings, or rent a longtail boat for a spectacular trip.

Other attractions include Jang and Poukham caves, the blue lagoon and Kaeng Nyui waterfall, and zip-lines.

Menawhile, the dengue fever cases in Laos have reached 156 since January, according to a report by Lao Ministry of Health.

According to a report from the ministry on Friday, if people fall ill, they should suspect that dengue fever may be the cause of their illness and get a blood test at a hospital.

The ministry advised that every family should drain water in jars, vases and dishes, and should cover such containers to prevent more water from filling them up.

According to the World Health Organisation, dengue fever is one of the fastest emerging infections, with Thailand, Laos, the Philippines and Singapore also seeing high incidences. The number of cases in the Western Pacific Region has more than doubled over the past 10 years. - Vientiane Times/ANN