A worker removing soil from a caladium plant before putting it into a bottle for shipment at a nursery in Sungai Besar, outside Kuala Lumpur. - AFP

KUALA LUMPUR, March 13 (AFP): Learning to tell your elephant ears from your flamingo flowers has become the latest virus lockdown escape in Malaysia, where houseplants are very much in season.

Collectors are searching out specimens with intricate patterns in a dazzling array of reds, yellows and greens, and sharing their best on social media.

"It's like looking at a painting," collector Leiister Soon told AFP, admiring the broad-leaf caladium -- elephant ear plants -- at his Kuala Lumpur home.

"Taking care of plants meant that I can divert my attention -- (it is) better than watching the number of Covid cases going up."

The plants are known as "keladi" in the local Malay language, but the trend has grown to encompass other species, such as anthuriums -- known as flamingo flower, or laceleaf -- and alocasias, whose varieties include the silver dragon.

Once relatively cheap, prices surged last year when lockdowns confined Malaysians to their homes, and many collectors started posting images of their favourite plants on social media. 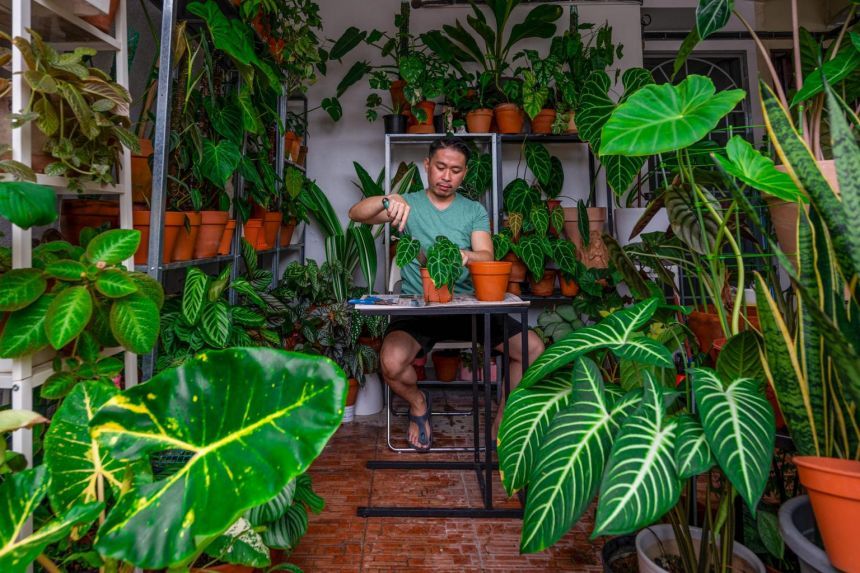 Leiister Soon adding fertiliser to an anthurium crystallinum plant in his home in Kuala Lumpur. - AFP

Soon says he spent more than 20,000 ringgit on plants in the past year alone.

"During the lockdown, people were at home thinking about how to beautify their homes," nursery owner Daud Kasim told AFP in Sungai Besar, 100 kilometres (60 miles) northwest of Kuala Lumpur.

"They could look at these plants -- and their stress would go away."

An avid collector himself, Daud said he started selling keladi plants in late 2018 but demand exploded during the pandemic.

Nearly half of his nursery's inventory is now made up of such plants, with foreign varieties from countries such as Thailand, China, the United States and the Netherlands.

Standing among thousands of potted specimens, Daud said the trend was here to stay, even as authorities gradually begin lifting restrictions.

Malaysia first imposed curbs last year shortly after the start of the pandemic and had to implement restrictions again in January when a new wave hit, but the outbreak is slowing.