"This means that there is probable magmatic activity that may or may not lead to an eruption,” the institute said in a bulletin.

Evacuation of residents living near the volcano is not yet recommended, but local government units were advised to boost contingency plans in case of more unrest.

Over the past 24 hours, Phivolcs monitored ground swelling, a spike in temperature of the water in the crater lake and dozens of volcanic earthquakes.

Thirty-nine people died due to illness while in evacuation centres and accidents caused by thick ash fall, according to the provincial government.

The authorities did not specify how many of those deaths were directly related to the volcano's eruption.

It is a popular tourist destination for its picturesque crater lake. Taal also has the distinction of being the only volcano in the world within a lake on an island. - dpa
Article type: metered
User Type: anonymous web
User Status:
Campaign ID: 46
Cxense type: free
User access status: 3 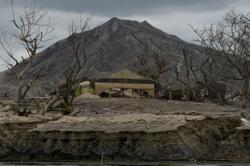