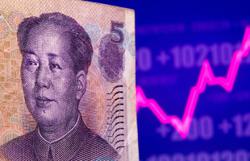 Shenzhen saw a record level of yuan-denominated cross-border payments last year, an encouraging sign for Chinese authorities trying to reduce the country’s reliance on the US dollar amid uncertain relations with the United States.

Cross-border yuan payments in the southern city hit a record high of 2.5 trillion yuan (US$386 billion) last year, up 46 per cent from 2019, according to data released earlier this week by the local branch of the People’s Bank of China (PBOC).

In addition, cross-border payments denominated in the Chinese currency surpassed those using the US dollar in the January-February period this year, the nation’s central bank said, without providing an absolute number or comparison.

The figures from Shenzhen, a hi-tech hub situated just over the border from Hong Kong, make up only a part of China’s overall cross-border payments, but they bode well for Beijing’s push to internationalise the yuan.

During the latter part of former US president Donald Trump’s administration, Beijing worried that Washington was bent on punishing it by denying access to the dollar-denominated international payment system, leading to calls from within China to redouble efforts to cut reliance on the American currency.

Although the new administration of Joe Biden is set to take a less antagonistic tone, the threat of financial war between the two countries has not disappeared.

Despite climbing to 2.42 per cent in January from 1.88 per cent a month earlier, the yuan ranked fifth among all global currencies, far behind the US dollar’s share at 38.3 per cent, the euro’s at 36.6 per cent, the British pound at 6.8 per cent and the Japanese yen at 3.49 per cent, according to the Belgium-based SWIFT international payment messaging service.

In addition to improving cross-border financial infrastructure, Chinese authorities have tried to build Shanghai into an international yuan trading centre, extend yuan-denominated loans and investment to countries taking part in the Belt and Road Initiative and quickly roll out large-scale tests of its sovereign digital currency.

Shenzhen, which is home to one of China’s two stock exchanges, as well as technology giants such as Huawei Technologies Co., Tencent and DJI, booked a 40 per cent rise in the use of the yuan for financial settlements last year at 38,000 businesses.

The value of merchandise goods payments in the Chinese currency rose 12 per cent year on year, according to a report in the government-run Nanfang Daily.

Zhou Chengjun, director of the PBOC’s finance research institute, said the opening of China’s financial sector to foreigners has become a new driver for yuan internationalisation, which started with cross-border trade settlements in 2009.

US dollar-yuan exchange rate: what is it and why is it important?

“I’ve been highlighting [use of the] yuan as a priority, hoping overseas investors will enter China’s financial markets with yuan, not US dollars,” he wrote in the magazine International Finance last week.

Many large foreign financial institutions have already set up or are planning to establish wholly owned onshore entities, after Beijing eased the restrictions last year.

At the same time, overseas investors increased their holdings of Chinese government bonds to a record level of 2.06 trillion yuan at the end of February, given better returns on offer in China than in either the US or Europe.

Chinese financial officials and advisers proposed a further expansion of the yuan’s use in overseas markets ahead of the annual gatherings of the Chinese People’s Political Consultative Conference and the National People’s Congress that started in Beijing on Friday.

Jiang Yang, former vice-chairman of the Chinese Securities Regulatory Commission, called for the launch of more yuan future products to meet demand from domestic investors to hedge against financial risk.

“We should quicken the pace of enriching Shanghai’s yuan exchange rate derivatives ... and expand its product lines to spot, forwards, futures, options and swaps,” he said. - South China Morning Post: