HONG KONG, Jan 18 (Reuters): Former Hong Kong lawmaker Ted Hui has renewed his criticism of HSBC for freezing his local bank accounts even after the global bank's chief executive, Noel Quinn, wrote to him to explain the circumstances.

The rare letter comes against the backdrop of anti-government protests in Hong Kong that left some branches of the London-headquartered bank vandalised in its biggest market during rallies last year.

The bank drew the anger of some protesters who accused it of being complicit in action by the authorities targeting activists' fund-raising efforts, but the bank has denied this.

Hui, who fled Hong Kong late last year after facing criminal charges over pro-democracy protests in the Asian financial hub, disclosed some of the contents of Quinn's message in a Facebook post on Sunday.

"Has HSBC followed professional procedures of screening, asking, finding and evaluating?" Hui asked on Facebook, regarding actions he expected of the bank before freezing the accounts.

"I openly hold HSBC accountable for answering these important questions," he wrote, posting only a brief part of Quinn's letter, but describing its content in detail.

Hui did not immediately respond to a request for comment on Monday. HSBC declined to comment on matters relating to specific accounts.

In December, the former lawmaker had said accounts held by him and his family appeared to have been frozen after he said he would seek exile in Britain to continue his pro-democratic activities.

At the time, Hong Kong police said they had asked banks to freeze his accounts over suspected money-laundering in an order unrelated to his flight from the city or the charges he faced over anti-government protests in 2019.

Banks were expected to cooperate with law enforcement efforts to freeze funds or property related to criminal investigations, the central bank, the Hong Kong Monetary Authority, said at the time.

In the letter sent last week, Quinn sought to explain why HSBC was unable to operate the bank and credit card accounts and said the bank was legally obliged to take action after notification from the authorities, Hui wrote.

In his post, he also asked HSBC to explain why members of his family were "collectively punished".

Authorities in the former British colony have stepped up a crackdown on the pro-democracy opposition since Beijing imposed a contentious national security law in June. 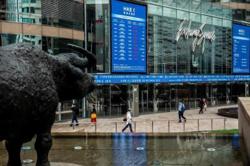