BEIJING: China Aerospace Science and Industry Corp, a leading defense contractor, conducted the maiden test flight of what it called one of the country’s best unmanned strike aircraft earlier this week.

The nation’s largest missile-maker CASIC said in a statement that the WJ-700 combat/reconnaissance drone made its debut flight on Monday at an unidentified airport in northeast China. The maiden flight verified the plane’s overall design and its subsystems’ compatibility.

“Next, the drone will carry out more test flights to examine its flight, reconnaissance and combat capabilities, ” it said, noting the product would be available to both domestic and foreign buyers once it enters the market.

The state-owned conglomerate called the WJ-700 “the first and only high-altitude, high-speed, long-endurance combat/reconnaissance drone in China”, adding that there is a very small group of similar products in the international market.

Research and development of the drone started in March 2018 at the CASIC Third Academy, a Beijing-based subsidiary specialising in anti-ship and cruise missiles as well as unmanned aircraft.

Designers intended to build an advanced model for beyond-visual-range precision strikes against land targets, ships and air-defence weapons, and also for long-range surveillance and reconnaissance.

In addition, it will be capable of fulfilling early-warning or electronic jamming tasks when mounted with related devices, according to the statement.

Liu Liu, the WJ-700’s chief designer, told China Daily on Thursday that the model is made of composite materials and is equipped with advanced instruments such as a fly-by-wire control system, highly integrated avionics and a high-bypass-ratio turbofan engine.

He said the drone is better than most of its type in the global market when it comes to operational duration, flight range and carrying capacity. — China Daily/ANN 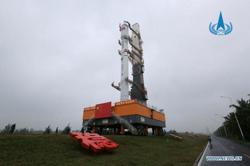